One of the most ground-breaking and influential programmes on television began on RTÉ 1 in 1984 and it had a high audience in this country for its five year run.
Detective series have always been popular in Ireland since the early days of television in the early 60s.  ‘Miami Vice’ was a series featuring young under-cover cops who dressed well and were surrounded by beautiful women, and who fought the good fight against evil criminals.

Drug cartels in Florida and throughout the everglades were the main focus for the cops. Music was a major part of the series, which played well alongside the movements of the good and bad guys. 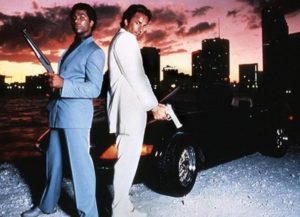 The mid 1980s was the beginning of Music Television (MTV), and Brandon Tartikoff, a chief executive of NBC television, was reported to have given a memo to producers green-lighting a cop show immersed with modern (1980s) music, and ‘Miami Vice’ was the result.

Many actors were considered including Larry Wilcox, Nick Nolte, Denzel Washington and Jeff Bridges but the chosen double male lead was Philip Michael Thomas as Tubbs and Don Johnson as Crocket.

When the series premiered on NBC in America, on Friday night, its main competition was the drama series, ‘Falcon Crest’ on CBS.

Within weeks it was obvious that Don Johnson had become the star of the show and long before the first season ended, he became one of the most recognisable faces in the world.

The 1980s was a time that detective characters in programmes became more than the one-dimensional figures that they had been in previous decades. They no longer just solved crimes followed by enjoying eating long lunches in cafeterias, and heading out to bars at night to drink beers with their mates.

This era’s US TV detectives were shown having difficulties in their marriages and family relationships, and some were Vietnam Vets, who still carried the scars of the war.Sonny Crocket, played by Don Johnson served in Vietnam.

They each had relationships, and children and the two actors were surrounded by an excellent supporting cast, including Edward James Olmos as their boss, Lieut. Martin Castillo.  Olmos came close to stealing the acting show from the two leads, and he did win Golden Globe and Emmy awards for his role.

In ‘Miami Vice’s’ second season it became a Top 10 show in America, and the series was a big hit internationally.  It was very popular on RTÉ 1 in Ireland on BBC in the UK. In Ireland, the series had a Saturday late night slot, and in the UK, it got a Tuesday night airing.

After the second season, Don Johnson went looking for a pay rise, and when that wasn’t forthcoming producers seriously considered replacing Crockett with a new character played by actors, Treat Williams or Mark Harmon.

Williams was big on Broadway, and Harmon had just left the drama series, ‘St. Elsewhere’, where he had gotten huge acclaim for playing an early AIDS victim, who was also a doctor. However Johnson did a deal with the producers and returned to the ‘Miami Vice’ set, and no other actor was cast in his place.

In the third season in America, the network pulled back the timeslot of ‘Miami Vice’ by one hour, and then ratings slipped because it was then opposite the Top 5 drama series, ‘Dallas’. While it was moved back again to its later slot, it never again recovered in the ratings.

‘Miami Vice’ was shot almost entirely on location in Miami, which would be unusual in series production today.

Music was an important part of ‘Miami Vice’, and the soundtrack of the series by musician Jan Hammer went to No 1 in 1985.  The episodes each featured several songs throughout storylines by 1980s artists. Singers such as Willie Nelson and Phil Collins guested on the hit series, and Scottish singer, Sheena Easton acted in four episodes as a girl that Sonny Crockett wooed and married, and sadly lost.

The clothes styles of the lads started a wave of fashion that swept the western world and is even still influential today. Crockett and Tubbs wore gear such as T-shirts inside jackets and shoes without socks, and both had a constant five o’clock shadow.

The end of the hit series came after the fifth season wrapped in 1989.  ‘Miami Vice’ left behind a legacy of exciting of stories, colourful male fashions and memories of popular music. ÷