It seemed unlikely in the mid-1980s that a US television series about a middle-aged woman solving crimes from her rural town would succeed. However ‘Murder, She Wrote’ surpassed all expectations and became a huge hit for more than a decade.
Angela Lansbury was a British star of stage and screen who went to Hollywood in the early 1940s.  She had been nominated for three Oscars, and had won two Golden Globe awards before she took up the role of mystery writer, turned detective, Jessica Fletcher on ‘Murder, She Wrote’.  She had also won many stage accolades, including winning four Tony awards. 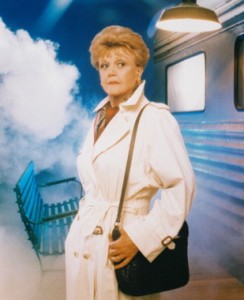 In the early 1980s, having clocked up a great career in acting, Angela Lansbury wanted to do a television series. She searched around for the right project, and she was offered a choice between two series, a comedy series with actor, Charles Durning, and a drama series called, ‘Murder, She Wrote’.  Over a weekend, she decided on playing Jessica Fletcher in ‘Murder, She Wrote’.

The role was ideal for Angela who felt there were things she could do with the part of the retired widowed schoolteacher, who writes best-selling novels, and solves real-life murder mysteries. CBS were doing badly on Sunday night, and saw some Agatha Christie movies do well in that slot, so they decided that a murder mystery series was right for them.

They began the hit series with a 90 minute movie to introduce Jessica Fletcher. She was living in the small town of Cabot Cove, Maine, USA and her first book, ‘The Corpse Danced at Midnight’, had just been published.  While visiting New York, Jessica’s nephew, Grady is accused of murder, which leads to her first real murder investigation.
The series was an instant hit, and became the No. 8 programme in the US by the time it ended its first season in 1985.

In the early years, there were many guest stars, like Ernest Borgnine, George Clooney, Shirley Jones, Mickey Rooney, and Fionnuala Flanagan.

Her husband, Frank, had died some years before the series began and, while the couple appeared to be very happy, they had no children. However family members like brothers of Jessica or Frank did appear at times, including their nephew Grady.

The series was immensely popular, and for its first 11 years on the air, it never went beyond No. 13 in the ratings. However the pressure on Angela Lansbury was immense, because she was in practically every scene and the producers planned many devices to make life comfortable for her and to keep her in the series.

One ploy they tried was having Jessica talking on camera about a murder case and then a different character would be shown solving the crime. Jessica would return at the end of the episode to talk about the crime, but this proved to be very unpopular with viewers and many turned off when they knew such episodes were being screened.

In 1986, ‘Murder, She Wrote’ was at the height of its popularity, and another CBS series, ‘Magnum PI’ was seven years on the air, not doing so well in the ratings.  So crossover episodes were planned, and actors Tom Selleck and John Hillerman appeared as their characters on both shows, as did Angela as Jessica.

In the Magnum episode, Jessica investigated a series of murders in Hawaii.  The two episodes were shown a few days apart in America.

After the fifth year, Angela was ready to leave the hit series and a script was written for her to sail off into the sunset with Seth, a resident of Cabot Cove, played by William Windom. However she changed her mind and the series continued on for another seven years.

CBS made a stupid move in 1995 by moving the then 11-years-old series from Sunday night to Thursday night. It had been mostly in the Top 10 for the first 11 years and had beaten back huge competition in that slot, including such successful series as ‘McGyver’, ‘Knight Rider’, Moonlighting’ and even ‘The Simpsons’.

However, once it went on Thursday night, and opposite the new sitcom, ‘Friends’, ‘Murder, She Wrote’ sunk to No. 58 in the ratings.

Angela Lansbury has lived periodically in Co. Cork, since the late 1960s. ‘Murder, She Wrote’ was finally cancelled by CBS in 1996 after the ratings dive. However, Angela went on to make four ‘Murder, She Wrote’ movies in the following years, including one in her beloved Ireland.

At age 90, Angela Lansbury is still involved in acting, mostly on the London stage. ÷