The story about a 1930’s USA rural family still brings a smile to many Irish people, almost forty-five years after it first began, writes David Flynn

Throughout the 1970s The Waltons was a popular teatime favourite on RTE and was the forerunner of many other family shows. 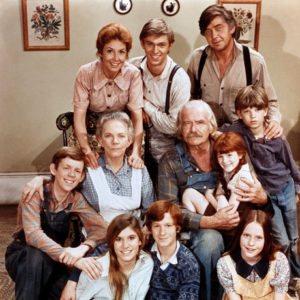 Streets and playgrounds around Ireland emptied as children rushed home to catch up on the latest happenings of John-Boy, Mary-Ellen, Jim-Bob, Elizabeth and all the rest of the Walton children.

The creator and producer of the series, Earl Hamner, was also the narrator and with his softly-toned Virginia accent, gave an introduction and conclusion to each episode.

‘The Waltons’ was based on Hamner’s own upbringing in the depression of the 1930’s in the mountains of Virginia, U.S.A.  He was the basis for the John-Boy character which was played by Richard Thomas.

Hamner wrote a family novel, ‘The Homecoming’ and it was published in 1970 and became a Christmas television special, with Patricia Neal as the mother, Richard Thomas as her son, John Boy and Ellen Corby as the grandmother. ‘The Homecoming’ was a major television success, and it was decided for it to return as a weekly drama series.

The first episode of ‘The Waltons’ premiered on US television in 1972.  After three months on the air, the programme was the No. 1 show in America.  It ran for nine years on television stations all over the world and spawned six spin-off television movies.
Ellen Corby, Richard Thomas and several of the children from ‘The Homecoming’ were chosen to appear in ‘The Waltons’. Ralph Waite played the father, John, and Miss Michael Learned played Olivia Walton, mother of the seven Waltons.

All of the characters in ‘The Waltons’ became loved by the viewers and there was no unpopular character, which is unusual for a television drama series.

Veteran actor Will Geer played the grandfather, who was a humorous, thoughtful and kind man. He was young at heart and played many tricks on ‘Grandma’ (Ellen Corby), and was a friend rather than a figure of authority to his many grandchildren.

The plot of the series concerned the Walton family who lived on ‘Walton’s Mountain’ – which was called after their ancestors.  However besides the Waltons, there were other characters in the series, who became firm favourites with the viewers.
They included the happy-go-lucky Ike Godsey and his cultured wife, Corabeth, who ran ‘Godsey’s Store’.  Two other favourites were Miss Emily and Miss Mamie Baldwin who were two elderly sisters of considerable wealth, who lived in a huge estate on Walton’s Mountain.

The two sisters had a still for making illegal alcohol, although they innocently believed it was harmless liquid, which they named ‘the recipe’.

Stories of humour and drama were built around all these characters.  During the nine years in which ‘The Waltons’ aired, the storyline brought the family from 1933 into the war years, culminating in 1943.

One of the few controversial stories in the series concerned the character, Daisy Garner, who was engaged to John-Boy at the end of the 1977/78 season.  Daisy had been keeping a secret, where she had a daughter that she’d given up for adoption six years previous.

When Daisy was reunited with her daughter, she wanted to make up for lost time, and didn’t want to pursue marriage with John-Boy. The storyline brought ‘The Waltons’ into a new era, and soon afterwards the effects of WW2 was felt by the mountain family.
Daisy was played by actress, Deirdre Lenihan, who was the daughter of an Irish emigrant, and the cousin of Irish politicians, Brian Lenihan and Mary O’Rourke.  Deirdre visited Ireland in 2013 for an Irish family gathering.

In its opening season, 1972/73, ‘The Waltons’ surprised the Hollywood television industry by winning 14 major awards. It won an Emmy (television equivalent of the Oscar) for Outstanding Continuing Drama series.

The series won the prestigious 1972 Golden Globe Award for Best TV Drama and Ellen Corby won the Golden Globe for Best Supporting Actress.
Throughout the 1970’s the series continued to pick up more awards including three for Ellen Corby, two for Michael Learned and one for Will Geer.  Earl Hamner and its other writers and directors also continued to win awards.

Before each of the television episodes ended, the final scene showed the outside of the Walton house at bedtime where some of the Waltons would have a quick word with each other, before sleeptime began.

The actors were never shown at this time, only their voices heard and the house in darkness would appear on the television screen. The episode then ended with whoever was talking, simply wishing the other one, and all the rest of the family – “Goodnight”.
The real goodbye for the series ended in 1981, but not before three reunion movies took place over the following year.  In the 1990s, three more reunion movies were broadcast, with the show finally saying goodbye in 1996 with the family witnessing John-Boy broadcasting the news of a man landing on the moon on his television news programme.