Much of the seedier side of life had been held back from television audiences, until ‘Hill Street Blues’ premiered in early 1981. This new drama series managed to show what was really happening on crime-filled streets of America, and yet also show the human side of the circumstances. 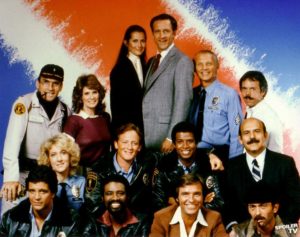 It wasn’t shown in Ireland until around 1983, but by then audiences here had multi-channel TV, so most viewers had already seen it on ITV.  In fact the theme from the show, by composers Mike Post and Pete Carpenter, was selling as a hit single before the series premiered here.
It quickly built up a following on this side of the world, surprisingly more so than on NBC in the USA. However it had tough competition for most of its run there.  It was up against a popular soap opera, ‘Knots Landing’ on the CBS network, and a news programme, ‘20/20’ on ABC.
Most episodes began early in the morning, and went throughout the day at a police station. Some of the action took place away from the station, whether it be at a street gang battle or at a drugs bust.
It was one of the first programmes to have a multi-cast, made up of more than twelve actors. However actor Daniel J. Travanti was first named on the billing throughout its entire seven seasons. He played Capt. Frank Furillo of the Hill Street precinct.
Furillo was the core character, and most of the multi-storylines were built around him. He led the precinct fairly, and was an honest broker in disputes between gangs, and between his fellow cops in the station. He had an ex-wife, Kay, played by Barbara Bosson, who appeared regularly to talk about their son, Frank Jnr.
Furillo was in a long-time relationship with a public defending lawyer, Joyce Davenport, played by Veronica Hamel, for the seven seasons. The couple were usually featured in bed at the end of the episode, talking about the events of the day.

The NBC network was unhappy with the show at the beginning.  They asked for the pilot episode to be re-shot, because they believed the lighting wasn’t right. But the producer, Steven Bochco wanted to portray what life was really life in such police stations, and he got his way.
‘Hill Street Blues’ broke all records when it was nominated for 21 Emmy awards for its first season. It won 8 Emmys that year, including Best TV series. Over the years, it won three more Emmys for Best TV series, including numerous other Emmys.  It also won two Golden Globe awards for Best TV series.
It was placed at 10pm on Thursday nights – a slot which it maintained for some years. It did things that shows at the time didn’t do, like having storylines running over four or five episodes, which was reportedly an idea of Barbara Bosson’s, who was then married to Steven Bochco. Rape, alcoholism, homosexuality, drug abuse, violence, and marital breakdown, were all dealt with in storylines on this series in ways they never had been before.
In the middle of its run in 1983, the series lost one of its pivotal character, Sgt. Philip Estherhaus, played by veteran actor, Michael Conrad. He coined a catchphrase, ‘Let’s Be Careful Out There’, which he delivered to the rookie police before they went on the beat for the day.

When the fifth season began in 1984 he was replaced by actor Robert Prosky, playing Sgt. Jablonski.  Prosky remained on the series until it ended in 1987, and his catchphrase to the rookies was: “Let’s do it to them before they do it to us!”.
It was the first series of its kind to show real-life in America, although there were a few police programmes like ‘Kojak’ starring Telly Savalas in the 1970s, that helped lead the way for ‘Hill Street Blues’.  It also was the forerunner of style for 1990s series, ‘NYPD Blue’ and ‘Homicide: Life on the Street’ and many others.
Ratings did slip after the fifth season, when there were changes of cast, because some had departed.  Also Capt. Furillo married Joyce Davenport, and his ex-wife Fay got a job in the squad room.  However Barbara Bosson left the series at the start of the sixth season, as did crucially, her husband, producer Steven Bochco.
However when Daniel J. Travanti announced he was leaving at the end of the seventh season, it was decided to cancel the series.  The two-time Emmy winner was probably considered the star of the series, despite the ensemble cast that was on ‘Hill Street Blues’.
The programme was a classic in its day, and showed the rest of the world, a true depiction of life in America, certainly more than most series did. ÷