A US comedy drama took centre stage on Irish TV on Saturday nights in 1983 and it starred a couple of familiar faces.

The series had the unusual name of Scarecrow and Mrs. King which left audiences confused and thinking it had something to do with a scarecrow in a farmer’s field. However it was about a suburban wife, Amanda, who found herself becoming a spy for the US government. Her sidekick, Lee was nicknamed ‘Scarecrow’ by his bosses. 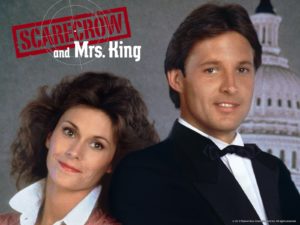 The series was filmed by Kate’s production company, ‘Shoot the Moon’ and sold to the CBS network. Her name and also that of her lead actor’s – Bruce Boxleitner, helped sell the series.

Bruce had a top role on the western tv series, How The West Was Won and in the 1982/83 season he was the lead in the action tv series, Bring ‘Em Back Alive. His latter series was popular on this side of the world, but flopped in America.

After the series was cancelled, Bruce was immediately cast in Scarecrow and Mrs. King.