A sitcom that became a cultural iconic series in the US is still fondly remembered for many things, including its popular character, ‘The Fonz’, and its catchy theme tune.
The programme began as a portion of an anthology sitcom series, Love, American Style in 1972, but Happy Days wasn’t then considered strong enough to be picked up by a network. Afterwards, Ron Howard, who appeared in the Happy Days pilot starred in the box-office hit movie, ‘American Graffiti’, and this interested the ABC network in the actor. They decided to give the series a chance. 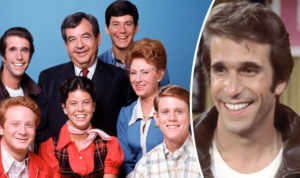 Henry Winkler wasn’t expected to be the star of Happy Days when it premiered in January 1974. Henry played ‘The Fonz’, although the series was built around his co-star, Ron, who was only nineteen-years-old at that time. Ron played Richie Cunningham, the youngest son of a Milwaukee family in the 1950s.

His father, Howard Cunningham, was played by Tom Bosley and mother, Marion, by Marion Ross. Erin Moran played his young sister, Joanie, and there was also an older brother, Chuck. Chuck was rarely seen, and was eventually written out and never mentioned again by the family.

The Cunningham parents were warm and funny with 1950s values, and their children – particularly Richie – followed the rock‘n’d roll world of teenagers of the time.
Arthur (The Fonz) Fonzerelli, played by Henry Winkler, was not even featured in the opening credits in the first season. However, he was in the pilot episode where the character was shown as a thug who threatened Richie.

Richie convinced The Fonz that it would be cooler if they became friends rather having a fight. The friendship grew and The Fonz became a special member of the Cunningham family.

The Fonz had a leather jacket, rode a motorcycle, and girls swooned in his presence. Henry Winkler had great chemistry with all other cast members, and he made The Fonz one of the most popular ever television characters.

When the series premiered in 1974, it had tough competition and was screened opposite two hit tv series. It was screened at 8 pm on Tuesday nights parallel to the controversial adult sitcom, Maude, on CBS and the police show, Adam 12 on NBC.
However Happy Days came in at No. 16 in the ratings for that short season. It was immediately picked up for second season (1974/75), in the same timeslot but this time it was up against another sitcom, Good Times, which was very popular with younger audiences on CBS. Unfortunately Happy Days failed to feature in the Top 30. 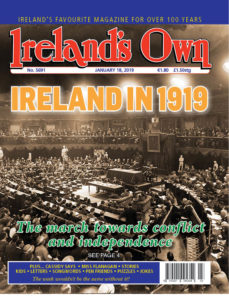 The series creator, Garry Marshall, who was also behind the hit sitcom The Odd Couple, beefed up The Fonz character when Happy Days was given the green light for a third season. Henry Winkler was given funnier storylines, and the series got a huge boost in the ratings by coming in at No. 11 for the season.

In 1975, Happy Days had its first spin-off series, Laverne and Shirley, about two girls who were friends of The Fonz. This series was very successful, and went to No. 4 in its opening year. Happy Days hit No. 1 in the ratings during the 1976/77 season.
Young actor, Scott Baio joined the cast of Happy Days in 1977. He played Chachi, cousin of The Fonz. Chachi became a love interest for the young Joanie Cunningham for the remaining years of the series.

Comedy and Science-Fiction mixed in a Happy Days episode when actor Robin Williams appeared as Mork from the planet Ork. The episode was such a success in 1978 that it led to a new spin-off, Mork and Mindy, which was a huge television hit internationally.

Happy Days was nominated for many Emmy awards, but won just one, for Film Editing in 1978. Henry Winkler won two Golden Globe awards and Ron Howard and Anson Williams won one each. It was twice nominated for Best Comedy Series.
Happy Days was a funny, feel-good sitcom, which ran for eleven seasons until 1984. Irish viewers enjoyed the series through its screening on UTV.