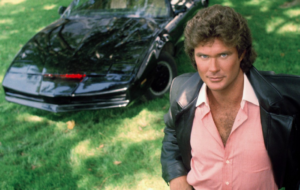 A talking car wasn’t exactly a new concept for a tv series in 1982, but with the great storylines and a popular leading man and co-stars, ‘Knight Rider’ became a classic television show of the era.

It was simply a series about a black Pontiac Firebrand Trans Am car, which had a brain of its own, with a sharp voice to match. Television had previously seen a talking car with a silly sitcom called ‘My Mother, The Car’, starring Ann Southern and Jerry Van Dyke in 1965.

However the ‘Knight Rider’ series was more tongue in cheek and the supercar was specially built with a futuristic computer, turbo powers of speed, was bullet-proof, could jump high distances and was an intense weapon against crime and criminals.
Michael Knight was the man behind the wheel, and he was played by David Hasselhoff, who would go on to star almost a decade later in another classic series, ‘Baywatch’.

The Knight Rider story began when Michael Long, a police detective, is shot in the face and left for dead. He is rescued by a billionaire, Wilton Knight, played in a cameo role by Richard Basehart, who was a star of the 1960s series, ‘Voyage to the Bottom of the Sea’.

Mr. Knight employs Michael as an agent in his organisation, the foundation for law and government (FLAG). The car is part of Knight’s organisation, and is known as KITT, which is an abbreviation of Knight Industries Two Thousand.

Michael Long was renamed Michael Knight and left his old life behind him and became the sidekick of the car, and between them they became a legend on tv screens in the 1980s.

The boss of the organisation is Devon Miles, played by Edward Mulhare, an Irish actor. Mulhare was born in Cork and in the 1940s he acted in the Gate Theatre, Dublin, and afterwards was spotted and asked to go to Broadway. He made many movies and tv appearances and played the lead in the 1960s sitcom, ‘The Ghost and Mrs. Muir’ with actress Hope Lange.

The other sidekick in ‘Knight Rider’ was Dr. Bonnie Barstow, KITT’s chief technician, who was played by Patricia McPherson. Something fishy went on at the beginning of the second season, when Patricia was suddenly sacked, and replaced by actress Rebecca Holden as another chief technician, April Curtis. Reportedly, Hasselhoff and Mulhare lobbied for Patricia to return and she was reinstated from the third season until the series ended.

The sharp voice of KITT was played by an uncredited William Daniels, who simultaneously was one of the lead actors on the hospital series, ‘St. Elsewhere’, which also began in 1982.

‘Knight Rider’ aired on Friday nights at 10pm on the NBC network in America. It was a really bad slot, because it was up against the No. 1 drama series, ‘Dallas’ on CBS. However, ‘Knight Rider’ built a following across the Atlantic and it was placed on Tuesday nights on ITV in England, and it was on the same night in Ireland on RTÉ 1.
David Hasselhoff was shot to international stardom with the series, and before the first season was over there was talk of a ‘Knight Rider’ movie for the big screen.
It was picked up for a second season and this time, it was placed at 8pm on Sunday nights on NBC, opposite new series, ‘Hardcastle and McCormack’. ‘Knight Rider’ entered the Top 30, and beat its ‘Hardcastle’ competition in the ratings.

However for the third season, 1984/85, things got more competitive when it was up against the new premiere series of ‘Murder, She Wrote’, starring Angela Lansbury.
As the years went by the producers experimented with storylines, and gave Michael an alter-ego, Garthe Knight, also played by David Hasselhoff. Garthe drove an evil truck, Goliath, and the storylines proved to be popular, but Hasselhoff found it too demanding to play a double part on the television series, so the idea wasn’t developed further.

There was another evil vehicle, KARR, the alter ego of KITT, and it featured many times over the series four year history.

There was a couple of spin-offs of ‘Knight Rider’ since then, but it never did get a big screen outing, although as recently as 2015 there has been reports that a feature film could happen with David Hasselhoff in the cast.