In the 1980s there was a sitcom about four mature women that kept people of all ages laughing, and became a hit throughout the world.

By 1985, tv viewers thought that they had seen everything in comedy, because there had been great and successful sitcoms up to that time, including ‘I Love Lucy’, ‘Mr. Ed’, ‘The Mary Tyler Moore Show’, ‘Taxi’ and ‘Happy Days’, and it seemed like all ideas had been exhausted. 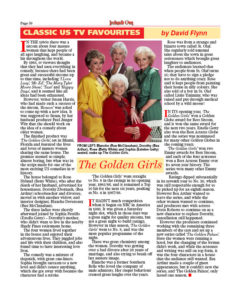 However, writer Susan Harris, who had made such a success of the sitcom, ‘Benson’ was asked to come up with a new idea. It was suggested to Susan, by her husband producer Paul Junger Witt that she should work on the idea of a comedy about older women.

The finished product was ‘The Golden Girls’, set in Miami, Florida and featured the lives and loves of mature women sharing the same house. The premise seemed so simple, almost boring, but what was in the script made for one of the most exciting US comedies in tv history.