One of the US Wild West’s most popular heroes was featured many times on screen, most notably on one of television’s first hit shows, beginning in 1949. 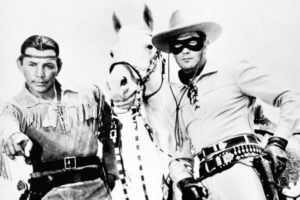 Westerns were a hugely popular genre of entertainment from the early days of cinema, and there were also many stories of the west on television from its early days. The very name, ‘Lone Ranger’ evokes memories of watching westerns on tv or in movies, among people of all ages. The character was a masked hero who fought the good fight and helped bring the bad guys to justice.

The Lone Ranger was created in the early 1930s and was featured on a radio series and in books and in two movie serials in cinemas days before World War 2.

The black and white television series began by introducing John Reid, who was the only surviving member of a group of ambushed Texas lawmen. Reid was barely alive and was rescued and brought back to health by an Indian called Tonto, who coincidentally was his boyhood friend.