An imaginative tv series of separate stories about the unusual started on US tv in 1959, and whenever its title is uttered, it conjures up memories of the strange and extraordinary. 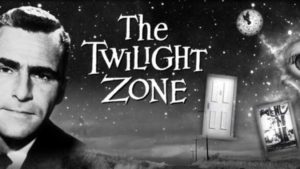 The Twilight Zone had an unforgettable theme tune that opens the black and white introduction of the programme into a space scene. A door appears in space followed by a window which breaks, followed by other objects such as an eye and a clock.

There were other such introductions by Serling as the series progressed.

The black and white half-hour show ran on the CBS network at the late time of 10pm on Friday nights. It had no great competition in that time slot, only a drama series called The Detectives, which starred top movie actor of the time, Robert Taylor. Reviews in the media across America were kind to Twilight Zone, which helped keep it on the air beyond the first season.