When ‘High Noon’ (A United Artist release) first surfaced in the cinemas in 1952 it caused one mighty great stir among ‘Western’ fans. Starring Gary Cooper and Katy Jurado it was seen as the’ be all and end all’ of everything as far as cowboy films went – the yardstick by which all future ‘Western’ productions would be measured.

It’s doubtful if anyone back then envisaged that within a few months another ‘Western’ classic would emerge, one that would be deemed to be equally as great as ‘High Noon’ and in some quarters judged…to be even greater! 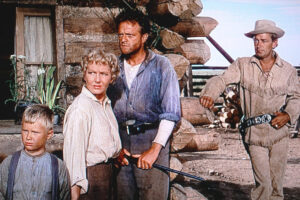 The film that I’m referring to bears a title that’s just about as short and simple as they come, a five letter word that spells SHANE (1953). Directed by George Stevens, this Paramount Picture’s offering in full colour is (according to a great multitude of ‘western’ buffs of a certain vintage) the ‘greatest cowboy film ever made’.

In ‘The Sea of Grass’ movie (1947) the storyline revolves around a ruthless, powerful rancher called Jim Brewton (Spencer Tracey) who is intent on grazing his cattle on open range, just as he’d been doing for years.

Most of the range he presides over is government owned land however, land that’s been allocated for numerous family settlements as happened in real-life through the Homestead Act of 1862. By movies end Brewton has bowed to the inevitable, accepted the fact that the days of open range grazing are gone.