It has been described as ‘Cork’s Hidden Gem’. The Byzantine-inspired church of St. Francis, home to the city’s Franciscan community, is tucked away on Liberty Street, not far from the city centre. Famous for its magnificent mosaics, it was the creation of the world-renowned artist, Professor Umberto Noni of Rome. Pat Poland explains how

The Franciscans – the ‘Order of Friars Minor’, or ‘OFM’ for short – came to Cork city in or about the year 1229, some three years after the death of their founder, St Francis. Their benefactor was Dermot MacCarthy Mór, king of Desmond, whose wife, the Norman Petronella Bloet, facilitated their installation.

They built a substantial church, the ‘Grey Friary’ – from the grey habits then worn – on what is now North Mall, the location of the present Franciscan Well Brewery and hostelry. 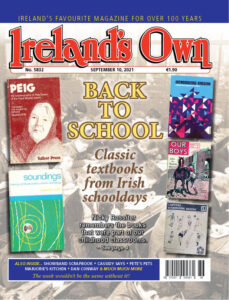 The well in the courtyard was said to have medicinal qualities, particularly for those with defective eyesight, and many came in search of a cure. The dissolution of the monasteries under King Henry VIII, however, severely impacted the foundation with the friary, its fishery and weir, being leased to a local businessman and the community scattered.
After Catholic Emancipation, the friars opened a new church, not outside the city walls as in times past, but at the very centre of town at Liberty Street. Dedicated on 2 January, 1831, it cost £4,500 to build and was proclaimed to be one of the finest churches in Cork.

Daniel O’Connell, ‘The Liberator,’ sent the Guardian an ‘IOU’ for £50 towards the building costs to be redeemed at an unspecified time: such was the parlous state of his finances that providing actual cash was quite beyond his means (it is unclear whether he ever ‘coughed up’!).

By the late 1800s the passage of time was visibly taking its toll on church and friary. Although declared dilapidated and unsafe, many considerations, mostly financial, forced the friars to baulk at anything other than the most pressing ‘stop gap’ repairs.

Almost sixty years would pass before a consortium of loyal benefactors decided that executive action needed to be taken.

The people of Cork responded magnificently to the appeal for funds and then, as so often happened in the history of the Cork Franciscans, external affairs intervened. The outbreak of the Second World War in 1939, bringing in its wake a scarcity of building materials and a period of uncertainty, decreed that the project be put on hold until happier times prevailed.