On the eve of the All-Ireland senior hurling and football finals, Mary Wall offers a fan’s perspective on Croke Park, the spiritual home of every true GAA supporter.

There are few people in Dublin who won’t be familiar with that short walk down Clonliffe Road, heading toward the hallowed ground of Croke Park on a late summer afternoon, as the hard fought Football and Hurling Championships come to their seasonal end.

It will be familiar ground too for those GAA disciples around the country who support and follow their county teams with a passion and religious ferver that would have many churches green with envy. 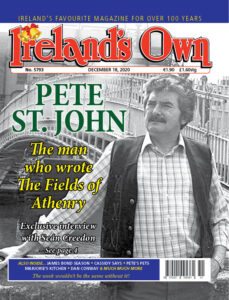 Yes 2020 in so many ways has been a very strange year, the championship delayed and sport being very hard hit, for players, coaches, and not least for supporters and fans. It can’t be much fun playing any match, to the echo of an empty or half-empty stadium. Most players are fuelled with adrenalin from the loud, flag-waving and raucous cheering of their respective supporters.

There is something special about Croke Park. Not only are the games themselves uniquely Irish, but the atmosphere, the banter and the passion is something that goes deep into the DNA of every Irish town, every Irish village and every Irish county.

Young children are born into it, teenagers grow up on it, heroes are made of it, and thousands of windswept parents stand by pitches each week shouting encouragement from the sidelines of a local playing field.

It’s probably a fair bet that wearing your county jersey, joining with the crowds and walking that short pilgrimage down Clonliffe and Jones’ Road, to Croke Park, is probably difficult to surpass. Donned in the obligatory county colours, the excitement, chanting, anticipation and good humoured banter as you make your way towards an All-Ireland final, is something dreams are made of. Young children, chaperoned by protective dads, absorb and embrace the boisterous atmosphere, filing it under ‘memories to treasure’.

If you are a Dubliner, and lucky enough to see Dublin in an All-Ireland final, there is that deafening roar and overwhelming joy that remains unmatched. Croke Park is, after all, home turf! This is not just a sporting event it’s a matter of honour, rivalry, an unbridled fight for glory, and a display of athletic prowess unmatched anywhere in the world.