Never having been one hundred per cent comfortable about the precise meaning of Table d’Hôte on restaurant menus, let alone not knowing how exactly to pronounce the French term, I decided it was time I did something about it.

I came across the following:

Table d’ Hôte, n, A caterer’s thrifty concession to the Universal passion for irresponsibility.
The foregoing was written by Ambrose Bierce. It appeared in his “Cynic’s Word Book” in 1906. Roy Morris Jr., esteemed historian and biographer, said, “Today,” [this was in 1999] “with the possible exceptions of Dorothy Parker and Oscar Wilde, he is probably the world’s most frequently quoted writer.”
I rose to the provocation and decided to refresh my knowledge of the eccentric Bierce. Anyone who defined history as “an account, mostly false, of events mostly unimportant, which are brought about by rulers mostly knaves, and soldiers mostly fools” surely deserved to be looked up.

On my way to doing just that I noticed that he defined a bride as “a woman with a fine prospect of happiness behind her”; a lawyer as “one skilled in circumvention of the law”, and a fiddle as “an instrument to tickle human ears by friction of a horse’s tail on the entrails of a cat.”

Caustic aphorisms and barbed definitions of that nature could only have come from someone who attracted such epithets as Bitter Bierce, The Devil’s Lexicographer, and the Wickedest Man in San Francisco.
A lexicographer is, of course, an author or editor of a dictionary, and Bierce would have been well aware of Dr Johnson’s definition of a lexicographer as a harmless drudge. There was nothing harmless about Bierce, and when someone nicknamed Ambrose The West Coast Samuel Johnson, instead of taking it as a compliment, Bierce was infuriated.

He spent a lot of his life being infuriated, and Roy Morris Jnr said that one of the reasons Bierce wrote as he did was “a lifelong thirst for revenge upon a world that he felt… had wounded him physically, spiritually and emotionally.”
Bierce, he said, was “only too happy to inflict upon ‘that immortal ass, the average man’ a painful — if often hilarious — rod of correction.”

Bierce was born in 1842 in Horse Cave Creek, a frontier community in Ohio, the tenth of 13 children of intensely religious parents. They gave all of their children names beginning with the letter A. Ambrose, whose childhood was distinctly unhappy, hated his first name. 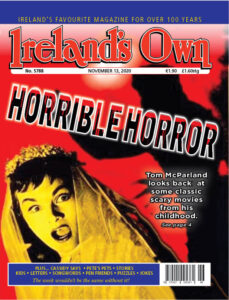 He barely tolerated his father, and his relationship with his hard-pressed mother was one of deeply rooted antipathy. He was blond haired and blue eyed, disobedient and surly, and in his middle age would say that disobedience was “the silver cloud of servitude.”

After his mother died he wrote, “Even now I cannot say that I experience any consuming desire to renew my acquaintance with her in that other life to which, she also assured me, we hasten hence.”
A budding writer of books such as “How to Win Friends and Influence People” (Dale Carnegie) he most certainly was not. But a highly successful writing career lay ahead of him. He would become a distinguished newspaperman, wit, satirist, and author of sardonic short stories based on themes of death and horror.

First, however, there was army service with the 9th Indiana Volunteers in the Civil War. He fought in several battles, notably at Shiloh and Chickamauga; was injured, and when he came out of the army, it was with the rank of major.
On Christmas Day 1871 he married a local beauty, Mary Ellen “Molly” Day. Her father gave them as a wedding present, an all-expenses-paid honeymoon in England. Bierce acquired a slight English accent that he held onto for the rest of his life.

The Bierces lived in England from 1872 through 1875, and while there he wrote three books. Looking back on their time there, he said, “We diligently, conscientiously, and with a perverse satisfaction burned the candle of life at both ends and in the middle.”

After 17 years of marriage, he walked out on his wife in 1889 after accidentally discovering a packet of love letters written to her by an infatuated Danish man. She protested that the letters were innocent, but Bierce left her forever, saying, “I don’t take part in competitions — even in love.”
In 1913 he went to Mexico and disappeared. His death remains a mystery. But his “Devil’s Dictionary” is still in print, still drawing blood.”

Read Dan Conway’s Corner every week in Ireland’s Own