Dan Conway’s Corner – The May Bush 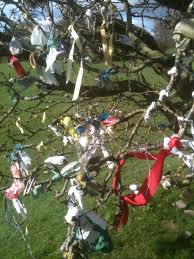 My late uncle, Peter Reid, always decorated a May Bush that grew, indeed flourished, on the hedgerow opposite his front gate. The bush stood, in the early summer sunshine, like a queen upon her throne, clothed in the little rags of hope and joy at the coming summer season.

At the beginning of the film ‘Maytime’ there is a wonderful scene of children singing as they danced around a great May Bush in the middle of their village. It is, I think, a mid-nineteenth century setting, but it had a kind of timelessness about it.

Jeanette MacDonald and Nelson Eddy were the stars; but the great May Bush – I guess it could more properly be called a May Tree – otherwise I might confuse it with another cinematic icon of her times, namely Mae Busch, who starred in many Laurel and Hardy shorts (though ‘starred’ was hardly the operative word).

Asked about it, he would laugh and suggest it to be an exercise of the jocular variety. But I suspect that, behind it, ran a thread or two of seriousness; enough, at any rate, to sew together a rag with which to contend.

“I see,” said Johnny Begley, “that Dan still refuses to end a sentence ​in a preposition​.” Whereupon Little Jimmy demanded to know what kind of a sentence that might be, and how long was it, and was that the long and the short of it?
As the singer Johnny Nash said in his chart-hit reggae song of the 1960’s or 1970’s, there are more questions than answers, and this is particularly true when in the enthralling company of Mr. James Murphy, who was really only ‘Little’ when placed in direct comparison with the lanky proportions of the Irascible One.

Once, in Dolly’s Select Lounge, a child was heard quite clearly asking its mother why was Johnny Cash singing reggae songs and not country songs anymore. It took that good lady quite a long time to explain the difference between Cash and Nash (both of which were Irish names, by the way: there was the late lamented Carrick-on-Suir photographer of the early 20th century, who tragically lost his life when his premises-cum-residence went up in flames one December night; and then there was the boxer Charlie Nash who had, if memory serves, a distinguished amateur career, but didn’t enjoy a very successful foray into the professional ranks). 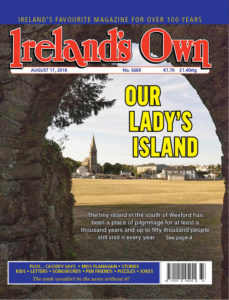 I’ve somehow managed to leave my uncle’s May Tree and wander into the realm of amateur and professional boxing, via the tragedy of a late-19th century-early 20th century photographer. That’s what happens, I guess, when ideas and memories start to bounce off of each other.

What my father used to call the ‘association of ideas’; something every writer and journalist understood; and every reader, too, perhaps, for my father pursued none of the former occupations, but he did read a lot.

There were books everywhere in our house when I was growing up. Detective novels, poetry, biography, books about great mountains such as ‘Kanchenjunga’ one of the three great peaks of the Himalayas; and Kilimanjaro, Africa’s highest mountain (a long-extinct volcano). Western and Detective novels. Old magazine such as ‘The Illustrated London News’ with black and white images of The Blitz. Smoke and ruins. Broken families.

I have a special edition of Coventry Cathedral as a smoking ruin; then as the restored great House of Worship after the war. And a copy of the Service of Consecration, in almost pristine condition, which I picked up some years back in a bric a brac store run by a chap named Brian Furlong.

I got locked in that very store one evening while ‘lost’ in a box of books down between two settees, and somehow didn’t hear the noisy rolling of the corrugated metal door along two dozen feet of metal tracks, nor its slamming shut – enough to have shaken rag and blossom from Uncle Peter’s May Tree. But that’s another story.