I keep promising myself that I will go to Austria for Christmas. For there, in Christkindl, near Steyr, there is a church with a dome. And within its walls, behind the reredos, or forming part of it, is the world’s oldest living Christmas tree. The story goes that in 1694, the town of Christkindl acquired a new sacristan who was also to serve as choirmaster. He came from the nearby village of Melk. The name of this new sacristan seems to have been lost in the mists of time. But he he had, unfortunately, one very distinguishing feature: he suffered from what was then known as ‘the sickness that makes one fall down’. 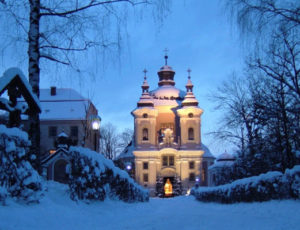 In our modern day parlance, he suffered from epilepsy. But I’ve heard it referred-to, when I was growing up, as ‘the falling down sickness’. And the thought crosses one’s mind that bell-ringing might well have exaserpated his condition, or brought on a fit. Perhaps, and then again, perhaps not. His affliction did not, apparently, prove too great an abstacle to him in carrying out his duties and he seems to have settled in to his life there and was well-liked and even admired by the folk of Christkindl.

There was a pine tree growing close by, not overly big, but of a normal tallness for such a tree, and it had a hollow in its trunk, a recess that, one could say, almost invited the placing of some religious object therein.

The sacristan from Melk, having a special devotion to the Child Jesus, placed a picture of the Holy Family in the hollow in the tree, and it was said that he found courage and consolation from kneeling in prayer before the picture. Then he heard that in some other town perhaps it was the city of Passau―that there was an image of the Christ Child that had healed a paralysed nun.

He set out to find it and. while there, he ecquired an exact waxen copy: a small, faithful life-sized statue of the Christ Child, holding a crown of thorns in one hand and a cross in the other.