Another busy year for Daniel!

One of Ireland’s best loved singers Daniel O’Donnell shares his special Donegal GAA memories, and reflects on his own career with Kay Doyle

It was Sunday, September 20th, 1992, a warm day of the few that were left of the season. Croke Park was alight with the blue jersey of the Dublin supporters and the green and yellow of the Donegal fans. In what was to become an epic, much talked about and cherished All-Ireland Football Final, Donegal edged their way to an unexpected victory, on a scoreline of 18 points to 14. When captain Anthony Molloy victoriously lifted the Sam Maguire Cup, the roar of the crowd could be heard for miles around. “Sam’s for the hills,” he famously exclaimed, and the fans went wild. 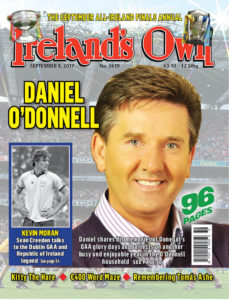 Among those fans was another Donegal great – Daniel O’Donnell. September 1992 was a month he would never forget, for many reasons.

“We had waited such a long time for that coveted trophy to come to the hills,” he smiles. “It was such an incredible day. At the time I don’t think anyone outside Donegal thought that they would beat Dublin that day, but it’s all down to what happens on the day, and Donegal were hungrier. It was magnificent, the lead up to it was fantastic – being in Dublin that weekend. I remember being on O’ Connell Street and you’re there meeting people from home just like you’re at home. Every ten yards you go, you meet someone from home!