Decimalisation Day – when Ireland lost its pounds, shillings and pence

After months of preparation, Ireland’s currency finally changed from the old pounds, shillings and pence to a new decimal currency. Decimalisation was overseen by the Irish Decimal Currency Board. It provided changeover information to the public including a pamphlet called Everyone’s Guide to Decimal Currency. Decimal Day, as it was known, took place 50 years ago, on 15 February, 1971, writes Gerry Breen.

Fifty years ago, on 15th February, 1971, decimalisation was introduced in Ireland, and it caused huge changes. The government had embraced a new currency system and the people had no option but to abandon pounds, shillings and pence, old friends that had served them well over the years.

The United Kingdom’s currency was also changed to the decimal system at the same time and there were serious concerns as to how the general public would handle this unusual event.

It was a monumental change, but it didn’t happen overnight. People had plenty of time to think about it. Nearly ten years previously, in February, 1962, the Irish government had announced that a decimal currency system should be introduced. 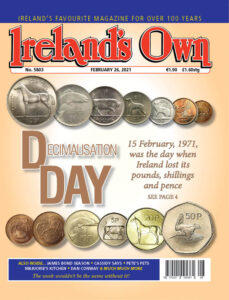 Before decimalisation, the old currency system consisted of pounds, shillings and pence, and was also known as LSD. The Latin for pound was Librium, and the symbols LSD meant Librium, solidus and denarius. This was a system which dated back to Roman times when a pound of silver was, apparently, divided into 240 pence or denarius.
Currency changes were very rare events, so it was easy to understand that people needed time to get to grips with an event which was to have far-reaching effects on their everyday lives.

Decimalisation was certainly not a new concept. The Russian rouble, which dated back to 1704, was the first decimal currency to be used in Europe. China had already been using a decimal system for many, many years. The United States of America, under the Coinage Act of 1792, was the first English-speaking country to adopt a decimal currency. In France, the decimal French franc was introduced in 1795.