Christmas has always been a special time of the year for Falling For A Dancer author, Deirdre Purcell. She shares some of her favourite festive memories with Kay Doyle.

It’s beginning to look a lot like Christmas, and author Deirdre Purcell, for one, couldn’t be more excited that the festive season is upon us once again. 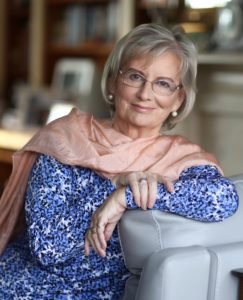 A self-described ‘celebratory’ person, the much-admired writer, journalist, and broadcaster, has always enjoyed stirring up a fuss on special occasions such as birthdays and anniversaries, and Christmas is the ultimate event when it comes to Deirdre planning a family get-together.

“I suppose it extends back to my own childhood,” she says, as she relaxes in the living room at her County Meath home, with the stack of this year’s carefully wrapped Christmas presents piling closer to the ceiling.

“I come from a small family. There was me, my brother, who was five and a half years younger than me, and my parents. We lived in Ballymun and my parents were also very celebratory people, even though we celebrated Christmas in a very modest way.
“Everyone was strapped for cash back then, there was never much money going around. But my parents did the very best they could, and Christmas was always a really special time.
“Ours was a three-bed house and became known as a ‘party house’ in the area. My parents loved having the neighbours and relatives over. At Christmas time, a bottle of whiskey would be put out, and twelve bottles of stout. There would be ham and egg sandwiches to munch on, and every guest had a party piece that they would perform.

“My father would be given a noble call for a rendition of The Old Bog Road and my mother would sing Whispering Hope, with her sister harmonising. And there would be lots of dancing, to the radio, because it was the time before television.

“The mother of one of my best friends was a real character and whenever she took off her earrings, it was a signal that the dancing was about to begin. It was nothing lavish, but everyone had a great time.”