Diamond Jim – A Man With A Ferocious Appetite

It is no exaggeration to say that James Buchanan Brady, who was born a hundred and sixty years ago, on 12th August, 1856, was the most colourful Irish-American of his generation. Brady rose from humble origins to become a businessman, financier, philanthropist and one of the wealthiest men of his day.  He was the first person to own a car in New York City in 1895, and his fondness for wearing enough diamonds to light up a Christmas tree earned him the nickname ‘Diamond’ Jim. 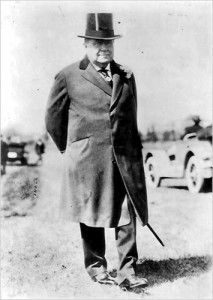 He was the son of Irish emigrants, John and Mary A. Brady, and his father owned a saloon on the lower west side of Manhattan. He began his working life at the age of eleven as a bellboy in a hotel, but within a few years he was working for the New York Central Railroad System and by the time he was twenty-one, he was chief assistant to the general manager of the railroad, John M. Toucey.

He really made his mark as a sales representative for Manning, Maxwell and Moore, a major railroad equipment firm. He quickly became the No. 1 salesman in the country. He knew that in order to make money you had to look like money, so he spent his savings on hand-tailored suits, a stove-pipe hat, a fur-collared overcoat and a diamond ring. When he made a sales call, he could easily have been mistaken for the chairman of the railroad company.

Brady was not only America’s top salesman, but he was one of the smartest businessmen in the country and he outmanoeuvred many famous rivals to become a multi-millionaire.

He didn’t believe in saving for a rainy day. He adopted an extravagant lifestyle and enjoyed life to the full.

He acquired a wardrobe of 200 custom-made suits and more than 50 glossy silk hats. For a single set of shirt studs, vest studs and cuff links, he paid $87,315. His diamond rings were the talk of New York, and among his collection of timepieces, one was valued at $17,500, following his death. He revelled in his nickname of ‘Diamond’ Jim and his answer to begrudgers was, “Them as has ‘em, wears ‘em.” He was one of the original tycoons in the history of New York City and he was possibly the most flamboyant.

Brady was often seen taking the air in Central Park on one of his twelve gold-plated bicycles with diamonds and rubies embedded in the handlebars. He presented a special gilt bicycle with mother-of-pearl handlebars and emeralds and sapphires mounted on the spokes of each wheel to the singer-actress Lillian Russell, one of the women in his life.
However, if ‘Diamond’ Jim had a huge appetite for jewellery, he had a gargantuan appetite for food.

His menu for a typical day was incredible with enough food to feed a small army. He would begin with a hearty breakfast of hominy, eggs, corn bread, muffins, flapjacks, chops, fried potatoes, a beefsteak and a full gallon of orange juice, which was his favourite beverage.

At about 11.30 o’clock in the morning, Brady would have to have a pre-lunch snack. This would consist of two to three dozen clams and oysters. An hour later, he would be ready for lunch during which he would consume clams and oysters, a brace of boiled lobsters, three devilled crabs, a joint of beef and several varieties of pie. Before he had time to digest this, he would be sitting down to afternoon tea which would include a platter of seafood.

The main meal of the day was still to come. This was dinner and it was often eaten at an exclusive Broadway restaurant, the proprietor of which boasted that Brady was ‘the best twenty-five customers’ he had.

As an appetizer for dinner, Brady would dispose of two to three dozen oysters, specially selected for him, followed by six crabs and a minimum of two bowls of green turtle soup.
The main course regularly included half a dozen oysters, two whole ducks, two portions of turtle meat, a sirloin steak, vegetables and an entire platter of pastries for desert.

These were all washed down with copious quantities of orange juice, and as an after-dinner treat, Brady would finish a two-pound box of chocolates.

It is not surprising that Brady’s amazing appetite attracted attention. People used to gather around his table to cheer him on and also to make bets on whether or not he’d drop dead before dessert.

Brady was a generous man and he donated a substantial sum to Johns Hopkins Hospital in Baltimore, Maryland, where he had once been treated. The hospital created the James Buchanan Brady Urological Institute in his honour. He died in his sleep on 13th April, 1917, of a heart attack. He wasn’t married and, following his death, his estate was distributed among many institutions.

When his body was examined, it was discovered that his stomach was six times the size of that of an average person.

Read fascinating stories like these every week in Ireland’s Own