Did Muhammad Ali Throw His Olympic Medal in the Ohio River?

He was black, 18 years of age, 6ft 3ins tall in his stockinged feet, and was called after his father. Standing on the Second Street Bridge in Louisville, Kentucky, he did something that for most people would be unimaginable — he hurled an Olympic Gold Medal into the depths of the Ohio River. 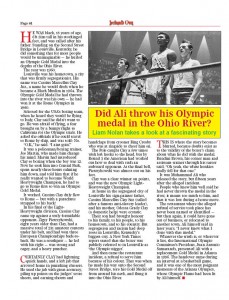 Louisville was his hometown, a city that was firmly segregationist. His name was Cassius Marcellus Clay Jnr., a name he would ditch when he became a Black Muslim in 1964. The Olympic Gold Medal he had thrown into the river was his own — he had won it at the Rome Olympics in 1960.

Selected for the USA’s boxing team, when he heard they would be flying to Italy, Clay said he didn’t want to go. He was afraid of flying, a fear brought on by a bumpy flight to California for the Olympic trials. He asked the officials if he could travel to Rome by ship, and was told: No.

It was a policeman/boxing trainer, Joe Martin, who made him change his mind. Martin had introduced Clay to boxing when the boy was 12. Now he took him into Central Park, spent nearly three hours calming him down, and told him that if he really wanted to become World Heavyweight Champion, he had to go to Rome first to win an Olympic Gold Medal.

It worked. Cassius Clay duly flew to Rome — but with a parachute strapped to his back!
In his final of the Light-Heavyweight division, Cassius Clay came up against a truly formidable opponent. Zigzy Pietrzykowski, eight years older than Clay, had a massive total of 231 amateur contests under his belt, and had won three European Championships back-to-back. He was a southpaw — he led with his right — was strong and cagey, and a heavy puncher.

Certainly Clay had lightning quick hands, and a left jab that arrowed home in punishing clusters. He used the jab with great accuracy, piling up points on the judges’ score sheets, and earning shouts and handclaps from crooner Bing Crosby who was at ringside to cheer him on.

The Pole caught Clay a few times with left hooks to the head, but by Round 3 the American had worked out how to deal with such an awkward opponent. At the final bell, Pietrzykowski was almost out on his feet.
Clay was a clear winner on points, and was the new Olympic Light-Heavyweight Champion.

At home in the segregated city of Louisville his sign-painter father, Cassius Marcellus Clay Snr (called after a famous anti-slavery leader), and his mother, Odessa Grady Clay (a domestic help) were ecstatic.

Their son had brought honour to his family, to his people, to his hometown, and to his country. But segregation and racism had deep roots in Louisville, Kentucky’s biggest city. A New York Times report stated that the boxer was publicly referred to in Louisville as ‘the Olympic nigger’.

And then came the restaurant incident, a refusal to serve him because of his colour. That was when he made his way onto the Second Street Bridge, tore his Gold Medal off from around his neck, and flung it into the Ohio River.

This is where the story becomes blurred, because doubts exist as to the validity of the boxer’s claim about what he did with the medal. Bundini Brown, his corner man and assistant trainer through his career said, “Oh yeah, the white honkies really fell for that one.”

It was Muhammad Ali who released the story, but fifteen years after the alleged incident.
People who knew him well said he had never thrown the medal in the river, it meant too much to him, and that it was lost during a house move.

The restaurant where the alleged refusal of service took place has never been named or identified — but then again, it could have gone out of business, or relocated to another town. Ali himself said in later years, “I never knew what I done with that medal.”
Whatever the truth is, or wherever it lies, the International Olympic Committee’s President, Juan Antonio Samaranch, presented Ali with a replacement Gold Medal in Atlanta in 1996. The handover came during an interval at a basketball game, and it was one of the most poignant moments of the Atlanta Olympics, whose Olympic Flame had been lit by Ali himself.