People had been searching for the Titanic since it sank in 1912. It was the most famous ship of all time and explorers were desperate to find it. Finally, that feat was achieved in 1985 by deep-sea explorer Robert Ballard. He used a small submarine to travel to the wreck and take pictures. He was the first person to visit the wreck of the Titanic in over 70 years, writes PAULA REDMOND

The wreck of the Titanic was discovered in September 1985 by deep-sea explorer Dr. Robert Ballard. It lay at approximately 13,000 feet below the Atlantic Ocean, 300 miles southeast of Newfoundland. 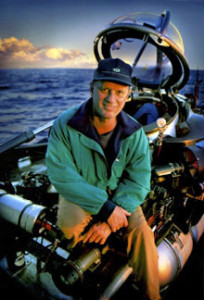 The search for the vessel had begun almost immediately after it sank on the 15th April 1912. At that time the main advocates of a search to find and raise the ship were wealthy survivors who had lost valuables in the disaster.

Even though the wreckage was not yet located, numerous suggestions on how to raise the ship were proposed; some logical and others quite ludicrous.

One was to freeze the ship with liquid nitrogen in the hope that it would then rise to the surface like a giant ice cube. Another idea was to fill it with ping-pong balls, thus making it buoyant, but this was unworkable, as the extreme water pressure at such a depth would crush the balls.

In 1966 Englishman Douglas Woolley announced his idea to locate the wreck and bring it to Liverpool – its designated homeport – to use as a floating museum. He founded the Titanic Salvage Company with financial backing from some German businessmen.
He suggested locating the ship by using a bathyscaphe (a self-propelled deep sea submersible) and to raise it to the surface by attaching nylon balloons to its hull. When the question of how the balloons would be inflated could not be solved the plans were abandoned.

In recent years Woolley has been in legal battles with RMS Titanic Incorporated, the company who claim to own the wreck, stating that he has rights to the remains of the ship. His claim is based on a British legal ruling that granted him ownership in the 1960s. However there are ongoing conflicting reports as to whether there were conditions attached to his ownership rights or not.

Throughout the years many expeditions to locate the Titanic were planned but never came to fruition. A joint expedition between the Walt Disney Company and National Geographic magazine was planned for the late 1970s but fell apart due to financial problems.

Seawise Salvage Company was set up in 1979 by British tycoon James Goldsmith. He planned an expedition in 1980 to find the wreck to promote his new magazine, Now, but the search mission had to be cancelled, again due to financial difficulties.
The magazine itself was also cancelled after a short run.

Jack Grimm, a Texan billionaire, had been involved in a few big publicity searches. In 1970 he had financed a search for the remains of Noah’s Ark on Mount Ararat in Turkey, and he had also searched for the Loch Ness monster.

In 1980 he launched his first search for the Titanic and the following year his team located what they believed to be a propeller during one of their quests. As a result, they claimed that they had located the ship. However on a return trip to the search site the ‘propeller’ could not be found again.

Even though the expeditions did not officially find the Titanic, their sonar mapping gave great insight into that region of the ocean floor and aided later exploration for the ship.
One of the main problems hampering the search efforts was inaccurate coordinates for the wreck site. The coordinates used were those given during the distress calls that had been sent when Titanic hit the iceberg in 1912.

After Grimm’s failed attempt it was acknowledged that the location had either been incorrectly reported at the time or that the wreck site had moved as a result of oceanic drift.

Oceanographer Robert Ballard had already unsuccessfully searched for the Titanic in 1977. However, by 1985 he had the advantage of newly developed deep-sea submersible technology, along with funding from the United States Navy.
He had been working for the navy on a project to locate two sunken US navy submarines that foundered in the 1960s. After his duties were completed the navy approved his request to search for the Titanic.

In the summer of 1985 Ballard, along with American and French scientists, sailed to the last known location of the Titanic and began to search the ocean floor.

Ballard’s work locating submarines for the navy had given him valuable insight into how to locate lost vessels. He learned that a large debris field was left when a vessel sinks and disintegrates on its way to the ocean floor.

Therefore he knew not just to search for the actual wreck – which was like looking for a needle in a haystack – but to also search for the much larger debris field.
State of the art French research ship Le Suroit scanned a 150 square mile zone in the north Atlantic. When Le Suroit was called away, the scientists transferred to an American vessel the Knorr.

When objects were detected by sonar, an unmanned submersible search vehicle named Argo was sent down to investigate further. On September 1st, 1985, a video camera attached to Argo picked up footage of one of  Titanic’s boilers. The bow and the stern of the wreck were separated and were located almost 2,000 feet apart.

There have been many research expeditions to the site since its discovery. Over the years artefacts such as silverware, wine bottles and even the crow’s nest on the foremast, have been removed from the wreck. Robert Ballard deplores this activity as he considers the wreck to be a gravesite. New protection orders hope to stop this in the future.