On April 3rd 2018, Doris Day celebrated her 96th birthday; and the famed singer and actress is still active – promoting her favourite cause – animal welfare.
Born Doris von Kappelhoff in 1922, Day studied ballet and tap dance growing up. In her early teens she won a local dance contest with her partner Jerry Doherty. However, her dreams of dancing professionally were shattered along with her leg in a 1937 car accident. 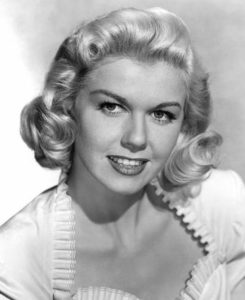 The daughter of a music teacher, Day started taking voice lessons during her recovery. Ella Fitzgerald was one of her early inspirations as she developed her own vocal style.

Day’s first singing performances were on local radio programmes. She also sang with bandleader Barney Rapp who encouraged her to adopt a stage name. She changed her last name to ‘Day’ after the song ‘Day After Day’.

Later, with Les Brown and his group, Day scored her first number one hits, ‘Sentimental Journey’ and ‘My Dreams Are Getting Better All the Time’. Her work with Brown made her a popular singing sensation during World War II. In her songs, Day seemed to be accessible and personable to her audience.