Goldenbridge was the first cemetery to be open to ‘all religions and none’ by Daniel O’Connell and his supporters after the passing of the Catholic Emancipation Act, predating Glasnevin Cemetery Dublin by several years until it was ultimately forced to close by the British Army, writes HARRY WARREN.

Dublin’s historic Goldenbridge Cemetery, hiding away in plain sight in Inchicore beside the Grand Canal, is one of Dublin’s more memorable ones. The cemetery has a dreamily romantic layout and nature lovers will appreciate this two-acre garden sanctuary dotted with beautiful mature Yew trees, a fine silver birch tree and various plants.
Garden cemeteries like Goldenbridge were designed to be not only a burial ground but a contemplative place to enjoy outdoor recreation before there were many public parks.

Today visitors may enjoy the design, architecture, and the garden layout where you will find striking monuments, graves, and a fine neo-classical Mortuary Chapel completed in 1835 for the sum of £230. Its architectural style is similar to the chapel in Paris’s iconic Père-Lachaise Cemetery. 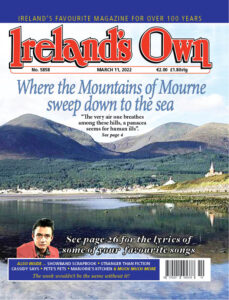 Beneath this chapel are vaults originally built to house night watchmen and their Cuban bloodhounds to protect the graves against body-snatchers. Back then it was a lucrative business to steal corpses and sell them to Trinity College, the Royal College of Physicians and the Royal College of Surgeons and also to foreign markets.

The chapel was designed with an interior staircase leading to the roof so the watchmen could keep a watchful eye on the surrounding area. The cemetery’s high walls and railings were completed before any burials took place to further deter body snatchers and reassure relatives who were burying their loved ones that they would be protected.

For those interested in history Goldenbridge has a lot to offer. Established in 1829, following the passing of the ‘Act of Easement of Burial Bills’ in 1824, this was the first cemetery to be opened following Catholic Emancipation in 1829, pre-dating Prospect Cemetery, (todays Glasnevin Cemetery), by three years.