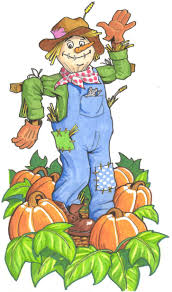 Have you ever wondered why scarecrows don’t have a name? It’s because nobody cares enough about them to ever give them one. That’s why. Farmers just want them to do a job; scare crows. If they don’t keep those big black ugly birds away from the crops, then the farmers will simply get angry. Then they will make new scarecrows, and the old ones will be thrown onto a bonfire.

Farmers think scarecrows have no brains, and no feelings. But they are wrong. The following story is about a scarecrow that finally had enough of being picked on, and picked at, by everyone and everything he knew.

Once upon a time, there was a big field of corn next to a dark forest. In the middle of this field there stood a scarecrow. He wasn’t the biggest or most frightening scarecrow in the world, but he tried his best to do what the farmer asked him to do.

Every day he tried hard to scare birds, so that they wouldn’t eat the corn. But just because he tried to scare them, it does not mean that he did scare them. Some birds, you see, have no fear.

One day, in the middle of the hottest summer for fifty years, the scarecrow was getting really angry. He stood all day under the blistering hot sun without taking a moment’s rest. A group of bad crows that lived in the nearby forest had been flying over and picking lumps of straw from his arms, legs, belly and even his bum. They showed him no mercy. In fact, they enjoyed teasing him.

What they didn’t know, however, was that all the time they were biting and pulling and ripping him to pieces, the scarecrow was using his brain to make a plan. ‘I’ll wait until the time is right,’ he thought, ‘and then I’ll have my revenge.’

That night, just after the sun went down for its sleep and the bright moon was almost completely covered by clouds, the scarecrow made his move. He climbed down from his pole in the field and began to walk towards the farmer’s house. The moon made his shadow look very strange. It was the weirdest of sights. Step by step, he strode through the darkness.

His light feet and legs were made from straw. They did not make a sound. When he reached the farmhouse, he stopped. Then he took a deep breath. The scarecrow had never done anything like this before.

He tried the back door handle. The farmer had left it open. He always did. The scarecrow sneaked his way into the house and towards the kitchen. There was nobody there. Everybody was sleeping. He made his way over to where the radio sat on the dresser, lifted it and carried it outside. There he placed it into an empty wheelbarrow. He went back inside, into the sitting room.

The scarecrow carefully lifted down the farmer’s television set, and carried it out to the wheelbarrow too. Then he crept his way up to the farmer’s bedroom and opened the door. The farmer and his wife were sleeping in their bed.

The scarecrow tip-toed his way past them and took down the second radio that Farmer listened to when he was having his afternoon rest. He carried it outside and put in the wheelbarrow. His plan was nearly complete. But there was one more thing that he needed.

In the farmer’s son’s bedroom he found the biggest CD player in the house. That was the last thing he wanted to get. He started pushing the wheelbarrow down the path, across the field, and into the dark forest. He did not stop until he was in the middle of the forest.

The scarecrow stopped and looked up into the trees. On the branches he could see the bad crows. Asleep. Their heads were tucked into their chests and they were snoring. “Perfect,” he whispered.

One by one, the scarecrow turned up the volume buttons on all the machines, until they could not be any louder. Then, with his straw hand, he hit the play buttons on the remote controls, all at once.

The loudest noises you have ever heard came blasting from the speakers. Screech, screech, screech. Wail, wail, wail. Crash, crash, crash. It was so painfully loud that the scarecrow had to put his hands over his ears. Farmer bolted upright in his bed. His wife stayed asleep, however. She could sleep through anything.

The bad crows jumped up out of their nests and started to scream and squawk. They were terrified. They had no idea what the noises were.

Daddy crows bumped into Mammy crows. Uncle crows crashed into auntie crows. Brother crows fell into sister crows. Sharp beaks scraped off sharp beaks. They screamed and yelled, and flapped their wings. As fast as they could, they started to fly their ways out of the dark forest. Screaming and squawking, screaming and squawking.

And there, in the middle of the forest stood the scarecrow. Cackling. His eerie laughter echoed through the empty trees. His plan had worked. He had given the bad crows such a fright that they would never come back again.

His revenge was sweet.

So remember, the next time you pass a field of corn and see a scarecrow hanging there on a stick beneath the sweltering sun, have a little think about his feelings.

After all, you wouldn’t like it if nobody bothered to give you a name.