Tom McParland continues his look at the movies down through the years that tried to make us squirm.

The only time I’ve ever been on the edge of my seat during a thriller is when I half-stood to let a drunk pass who needed the loo. Just at the very moment when suspicion fell on that suspect Mother Superior who resembled a Father Inferior in drag. A patience-trying sigh emitted from the whole row. For the next fifteen minutes we’d watch the movie with uneasy anticipation of his staggering return. 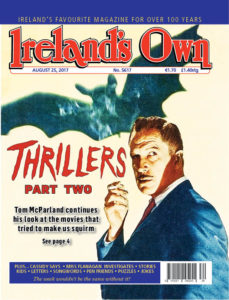 Turned out that virtuous Mother was only an Arnold Schwarzenegger doppelganger. So, if she wasn’t the thief it hadda be that visiting Cardinal that pawned the convent’s jewelled cross to save his tattooist brother’s shop. Then, back elbows the drunk disrupting civilisation, enquiring in the voice that breathed o’er Eden, “What happened –?”

What happened? What’s it about? No – don’t tell me the end! Three sentences which embody our interest in the thriller movie. How the director drips the detail about the body in the library, the washed up corpse or the accident that wasn’t, will determine whether our interest waxes or wanes. But our ingested rules as to method, circumstance and discovery are as inflexible as any forensic scientist’s.

The killer must be known to us. Preferably have gained our sympathy and must be entirely above suspicion. We can be held on that proverbial seat edge if the plot is compelling, complex, preferably with more twists and turns than a glutton’s intestines. It’s our distance from the reality of premeditated murder that allows us to enjoy movies about single or multiple slayings.

The day of the silent movie was by no means over quite yet. Long after 1928 most cinemas in America and Ireland stayed silent. And British and American studios still had rafts of unreleased and in-production silent movies. So there was big money in keeping mum. Because wiring for sound was an expensive business.

Who for example, would buy a second hand silent projector? Some cinemas went half-hog and installed speakers and amplifiers to relay sympathetic musical accompaniment to beef up silents. This may well have got rid of the pianist but it was still fallible. Sometimes, Do You Want Yer Auld Lobby Washed Down somehow blurted out during a tense medical scene, or Yes! We Have No Bananas during a passionate one.

Studios too, temporarily adopted the interim route, adding sound segments to “goat-gland” movies (the term related to a then-chic anti-age procedure). And hiccuping towards aural heaven, silly silent plots were grafted onto thrillers that half-talked or talked. Typical was: Boxer amputee receives the hands of a concert pianist. Boxer can now play Tchaikovsky’s Piano Concerto in b-flat minor right through, provided he pauses on the three-minute bell, has a towel-down and neck rub.

Continue reading in this week’s Ireland’s Own (issue 5617)