The Scottish invasion of Ireland, launched in May 1315, wreaked terrible destruction across Ireland, writes CHARLOTTE MURPHY

On 25th May, 1315, Edward Bruce, brother of Robert Bruce, King of Scotland, landed at Larne harbour Co. Antrim with a powerful army consisting of six thousand men. Thus began three years of violence, bloodshed and famine, throughout most of Ireland.

The purpose of this invasion was to distract the attention of King Edward II of England from his determination to conquer Scotland. The Bruces assumed that if Edward had to worry about defending his lordship in Ireland he would have less time and money to spend in subduing the kingdom to the north.

They also hoped that when they burned and plundered Ireland, the English King could no longer draw on its supply of food and manpower for his war in Scotland.
The invading Scots were war-hardened soldiers clad in chain-mail; the local levies which the English in Ireland could raise against them were easily defeated. 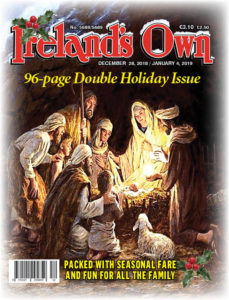 In early June, Donal O’Neill and twelve fellow northern kings met with Bruce at Carrickfergus and swore fealty to him as King of Ireland. Bruce had captured the town of Carrickfergus, but not its great castle. With Irish warriors now attached to his army, Bruce moved south, through the Moyry Pass, with the intention of taking the town of Dundalk.

Outside the town Bruce encountered an army under the command of John FitzThomas Fitzgerald, 4th Lord of Offaly. However the Scots pushed it back into Dundalk and on 29th June, the unfortunate inhabitants were robbed and murdered, while their town was consumed by fire.

A poem written, approximately fifty years after the event is very graphic in relation to the actions of the Scots:
And in the town made such a slaughter,
Such a shambles, that like water
From lying bodies flowed the blood
Through streets and gutters in a flood.

A very large army was now collected by Richard de Burgh, the great Earl of Ulster. Bruce, taking advice from his ally Donal O’Neill, moved back up north, burned the town of Coleraine and destroyed its bridge over the river Bann in order to prevent de Burgh’s army crossing over and engaging them in battle.

The lack of food became a big problem for both armies but the Scots were helped by the local Irish kings, while the Earl of Ulster had to move forty miles to Antrim town to replenish his provisions.

With his army now fed, the Earl moved down to the episcopal centre at Connor to prepare for battle – but on 10th September, the Scots anticipated him and before he could make his army ready they flung themselves at his troops, who broke and fled.