When the first plane took off from Dublin Airport in January 1940, it was thought that the target of 100,000 passengers per year it was designed to handle was over-ambitious, but in 2018 it accommodated more than 30 million travellers, writes David Tucker.

A little over 100 years ago, Dublin Airport was still a field of dreams – a green place that looked a good place to site an airfield for the fledgling Royal Flying Corps (RFC) – one of six sites scouted by World War 1 fighter ace William Sholto Douglas.
He was recuperating in Ireland at the time after his biplane had crashed into a white plough horse while he was taking off in Treizennes, in Northern France.

The fate of the horse is unknown, but Sholto Douglas recovered fully from that incident and reputed dog fights with Max Immelman and the Red Baron amongst others going on to become a major figure in the British Royal Air Force, pioneering the Big Wing fighter squadrons which defeated the German Luftwaffe during the darks days of World War 2. 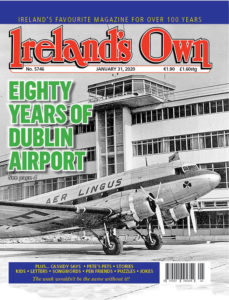 Although he was a man of vision, Sholto Douglas could have had no idea that his green field at Collinstown would become one of Europe’s most successful airports, last year attracting, more than 31 million visitors as Ireland’s premier aviation gateway.
The DAA says that while the first commercial flights from Ireland took off from Baldonnel Aerodrome in the 1930s, what was then the Irish Air Corps base at nearby Collinstown, was ultimately selected as a more suitable site for the development of a commercial airport.

The then-government accepted this recommendation in 1936, although Aer Lingus had already commenced some operations from Baldonnel. The site at Collinstown lent itself to future expansion and was particularly suitable from an aviation and meteorological point of view.

It had served as a British Royal Flying Corps airfield during World War I, and later a base for the Royal Air Force and was initially taken over by the Irish Air Corps when Ireland gained independence.

Plans for the development of Collinstown airport were completed early in 1938 and tenders issued. The airfield had fallen into serious disrepair since its occupation by the RFC/RAF and significant works were required on all elements of the development – airfield, landside buildings and access roads.

The new terminal building was central to the development plan for the airport.

The DAA says records indicate, however, that it proved difficult to persuade the government of the day to consider ‘such an elaborate plan’ particularly as annual passenger numbers carried by Aer Lingus in 1936 were only in the hundreds.