Entertainers By Accident – The Story of the Brothers Grimm

Margaret Smith tells the story of the creators of the world’s greatest fairytales.

On 20th September 1863, a German, Jacob Grimm died. Along with his brother, they gave an inordinate amount of pleasure to children and adults alike, something they never intended to happen. The reality is that the two brothers both intended to follow in the footsteps of their father and join the legal profession and they became entertainers purely by accident. 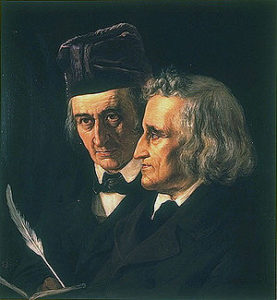 The Grimm Brothers, as we know them, were born a year apart, Jacob in January 1785 and Wilhelm in February 1786. They had six brothers and a sister and their formative years were spent in the town of their birth Hanau, but by the time Jacob was eleven, three of their brothers had died and their father’s death in 1796 created sudden and severe hardship for the family.

Their mother, Dorothea, had to rely on financial support from members of her own family to bring up the surviving children and the brothers were only able to complete their early education thanks to the generosity of another aunt. When they were able to continue their studies at Marburg University their poverty prevented them from joining in the normal social life of students though the situation did encourage them to pursue their legal studies with greater determination than most of their fellows.

Realising their determination to succeed, their Professor, Friedrich von Sauvigny, allowed the brothers to use his own private library and this was to change their lives completely. The pair spent hours enthralled by the tales they read in the wonderful manuscripts in the Professor’s collection.

When they had graduated though they became more and more interested in studying medieval German literature and, fascinated by the stories they had read, they decided to find out what other, if any, similar stories existed.

Collecting such stories and folk tales became something of an obsession. Some of the more famous stories such as ‘Cinderella’, ‘The Sleeping Beauty’ and ‘Little Red Riding Hood’ had already been published in Charles Perrault’s  ‘Tales of Mother Goose’, others they discovered in a variety of ways.

They were told that a certain shepherd had a great knowledge of folklore and similar tales, but when they approached him he was reluctant to share his knowledge with them. However, when a bottle of wine was produced, the brothers could hardly stop his story telling.

On another occasion, they gave an old soldier who had fallen on hard times a pair of their old trousers and he then told them stories he had heard as a boy and during his travels with the army.

When the brothers went to the local market each week, they bought their vegetables form a stall run by a widow woman whose father had been an innkeeper and she repeated stories she had heard as a child from visitors to the family inn.

There was also a tailor’s wife who told them stories she remembered from her childhood and if she was ever asked to repeat a particular story she did so in exactly the same way as he had told it originally, not a single word had been changed.

Getting stories from one old woman who lived in an old peoples’ home was rather more difficult. Wilhelm had been told that this particular woman had a wealth of tales to tell but she always refused to repeat then to him. Eventually he found out that she was afraid that if the other occupants heard her telling him childish stories, they would think she was mad.

Then Wilhelm had an idea, he took a group of young children to the home and the woman was more than happy to tell them her stories. Little did she know, though, that as the children sat around her entranced by her stories, Wilhelm was behind a curtain writing everything down.

By 1812, the brothers had collected enough information to publish eighty-six such stories in ‘Children’s and Household Tales’, the book better known as ‘Grimm’s Fairy Tales’. Whilst the contents may have resembled an A-list of fairy tale celebrities, sales were modest.

It wasn’t surprising really because the book wasn’t even aimed at children. The brothers regarded it as a scholarly and academic work with no illustrations and with footnotes taking up almost as much space as the stories themselves. Even adults were offended by the gruesome punishments inflicted on some of the villains in the stories.

In the original ‘Snow White’ story, the evil stepmother was forced to dance in red hot iron shoes until she died and in ‘Mother Goose’ a treacherous servant was stripped before being thrown into a barrel, studded with sharp nails, and then dragged through the streets!

Only when parents began telling children ‘watered down’ versions of the stories did the brothers finally realise that there was a market for such tales and they began refining and softening the stories for a younger audience. The footnotes disappeared and the stories became more moral in outlook with the readers being subtly reminded to work hard, do as they were told and not talk to strangers.

Today, the Grimm brothers fairy tales, and there are now about two hundred of them, have been translated into over a hundred and fifty languages.