Ernest Shackleton – The Lure of the Great South Continent

In the first of two successive articles, BILL MCSTAY describes the adventurous journeys of the Irish-born explorer

In the South Atlantic Ocean over a thousand miles east of Cape Horn is the isolated island of South Georgia. One hundred miles long and twenty wide, this windswept land with several snow-capped peaks rising to over 6,500 feet high, was discovered and named by Captain James Cook in 1775.

Host to as many as 30 million seabirds, its first whaling station was established at Grytviken on the east coast by Norwegian whalers in 1904, as a base for their ships in the surrounding ocean hunting grounds.  Between 1904 and 1965 when all whaling ceased, over 175,000 of the great mammals were killed and processed. 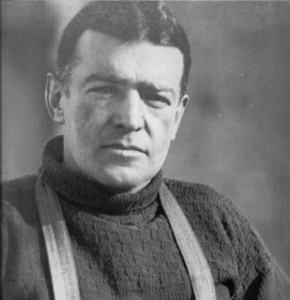 Exactly a century ago, in May 1916, six men in an open whaleboat came ashore at King Haakon Fjord on the west coast of South Georgia, after a danger-packed voyage of over a thousand miles across the treacherous Southern Ocean.

Two of them were Irishmen—Ernest Shackleton their leader, and the dependable Kerryman, Tom Crean.  What they were doing there and why, involves the personality and career of ‘the Boss’ as Shackleton was known to his men.

Ernest Henry Shackleton was born in Kilkea, near Athy in County Kildare, on 15 February, 1874.  Descended from a Yorkshire Quaker family who had come to teach in Ireland, it would be fair to say that Ernest, though Irish-born, was always English in his outlook and loyalty.

Open and friendly, a lover of poetry, he was also determined and courageous, and possessed a certain restlessness which ever sought new worlds to conquer.
After a happy childhood in Kilkea and four years in Dublin, the family moved to London where his father would practice medicine.

Educated at Dulwich College, Ernest felt the call of the sea, and so at sixteen he became an apprentice officer with the White Star Shipping Line, and for the next decade as a ship’s officer travelled to all the world’s major ports.

Accepted by Captain Robert Falcon Scott for his National Antarctic Expedition, Shackleton spent the years from 1901 to 1903 on the great south continent before being invalided home with scurvy.

After marriage and various occupations ashore, he managed in 1907 to secure financial backing from a Mr. Beardmore for a British Antarctic Expedition  led by himself.  A vessel called NIMROD was bought in Canada and refitted for arctic sailing, stores were purchased and members recruited.

On New Year’s Day 1908, the expedition left the port of Lyttleton,  New Zealand. By 9 January of the following year, the party had made it to within 97 miles of the South Pole, but Shackleton realised that to press on in the daunting weather conditions could mean disaster.

So after a small ceremony to mark their position of Farthest South, the party began the long and difficult battle against the elements to where they had anchored Nimrod.
On reaching New Zealand, Shackleton telegraphed news of his expedition’s accomplishment to England, and received an avalanche  of congratulatory cables.

Celebratory dinners, honours – including a knighthood – and lecture tours at home and abroad occupied the next few years.

During this time, the explorer learned of the race to the South Pole between Scott and the Norwegian, Roald Amundsen, who reached the goal of their ambitions before the Englishman on 14 December, 1911, a short while before Scott.

He received too, with sadness, the further news that Scott and three of his team perished on their return journey to base and safety.

Finding that the satisfactions of family life and humdrum work were not enough to still his restless longing for adventurous challenge, the now Sir Ernest raised the funds, through the generosity of a Dundee jute manufacturer called Sir James Caird, to float a new Imperial Transantarctic Expedition, which would aim to cross the ice-bound southern continent from sea to sea.

So it was that as the countries of Europe prepared for the Great War 1914-18, the expedition sailed for Antarctica on a tide of popular excitement. At first all went well, but the day came inevitably when the ship Endurance fell victim to the crushing ice floes of the Weddell Sea, and would be steadily dragged to destruction.

When that happened, in November 1915, it would mark the moment when Shackleton’s decisions, fraught with danger as they were, would mark his finest hour as an explorer.

Part Two, Next Week: A RESCUE AGAINST THE ODDS.