From her building in 1905 to her pivotal role in the 1914 Howth gun-running and her later use as Ireland’s first national sail-training vessel, the Asgard has had many incarnations. On display in Collins Barracks since August 2012, she stands as a monument to the skill of both the original builders and the conservation team, as well as a reminder of the turbulent events of 1914, wrties JIM REES

We have to admit that, for an island nation, successive Irish governments have given scant attention to our maritime potential or heritage. Many of our historians have been equally remiss, the late Dr. John de Courcy Ireland being a notable exception. 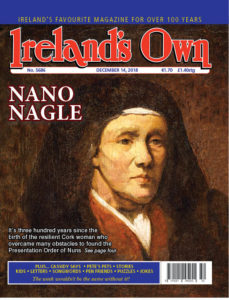 Recent decades, however, have shown a growing awareness of the vital role that the sea has played in shaping the Ireland we live in today. One positive sign of this fledgling appreciation has been the conservation of the yacht Asgard.

Asgard now has a complete building to herself and her story in the Collins Barracks venue of the National Museum of Ireland. She has been faithfully conserved and beautifully displayed, never failing to draw ‘ooohs’ and ‘ahhhs’ from all who see her.
The yacht was originally a wedding gift to a young Englishman named Erskine Childers and his American bride, Molly Osgood. Molly’s father was an eminent doctor in Boston. He ordered the boat from the yard of the famous Norwegian designer and builder Colin Archer, and it was ready in 1905.

This was no sailing dinghy designed to give a few hours pleasure in a sheltered bay. At a cost of £1,000 (between £90,000 and £100,000 in today’s terms), Asgard was a sea-going, two-masted yacht capable of crossing major seas – and oceans, if needs be.
Not only that, Molly had some physical difficulties which were the result of a childhood accident and certain aspects of the yacht’s design had to take these into consideration. Molly refused to let such difficulties hold her back, and she often took control of the Asgard while strapped at the helm.
Childers was an experienced yachtsman and went on to gain fame through The Riddle of the Sands, an espionage novel, drawing largely on his sailing expertise.
Although English by birth, Childers’ mother was a Barton from County Wicklow and he spent many happy summers and other holiday breaks in his maternal ancestral home, Glendalough House.

As befitted someone of his public school background, he joined the diplomatic service in Britain, but the Boer War in South Africa made him doubt his hitherto unquestioning acceptance of imperialism.

It prompted him to look at Britain’s role in Ireland, eventually becoming a committed Home Ruler.