The best excuse I ever gave for being late for school was the truest. The teacher in question, a Christian Brother, happened to have a sense of humour and not alone found my excuse entertaining but entertained it for a while.
My excuse for being late for class was simple: “Brother, I was watching a cat chasing sheep in a field.”

“A cat,” you say.”
A cat, brother.”
“And its unusual behaviour kept you late for school?”
“It did, brother.”
“No doubt but it was a sheep-cat?” he remarked. I didn’t understand. Then the penny dropped. Sheep-dog. Sheep-cat.

I laughed. Or half laughed. You had to be so careful when teachers told jokes. It was perfectly okay for them to crack jokes but it wasn’t necessarily okay for us pupils to laugh at them. The ability to gauge how much you could laugh at a teacher’s witticism or clever remark was an art in itself.

My best excuse for being late for school – when I was the school Principal – was also a true one. I got stuck on a train!

Our first class pupils were heading off to Dublin Zoo – an annual treat after they’d made their First Holy Communion. I went to McDonagh station (in Kilkenny) to see them off. For some reason or other I couldn’t locate their teacher. The boys were there alright exploring every nook and cranny of the platform but no sign of the teacher.

With time running out and still no sign of the teacher I had no choice but to board the train and seat and supervise our pupils. As the train edged out of the station the teacher came running and with great athleticism, I must say, jumped on board. 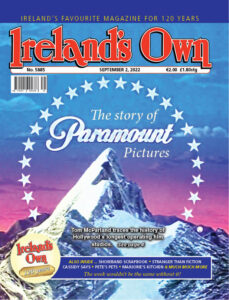 “Sorry,” she panted. “The clock never went off.” And now it was time for me to get off – or rather jump off.
Now, it might seem like a simple thing to jump from a relatively slow moving train. After all they do it all the time in the movies! Hell, they even leap from speeding trains but life ain’t like the movies.

And so I ended up in Bagenalstown at a time when I should have been sitting behind my office desk in school. And this, of course, was BMP time i.e., ‘before mobile phone’ time and instant communication. These were the dark ages when people were left in the dark until a call from a public phone box