Exploring Sligo – lots to do in Yeats Country

Not content with having some of the country’s most beautiful scenery from remote islands to tranquil beaches and the magnificent Benbulben mountain, County Sligo also lays claim to being Ireland’s ‘adventure capital’, with activities to suit all ages and tastes, writes David Tucker.

SLIGO is home to many megalithic cemeteries along with early churches and monastic settlements, making it one of the best places in Ireland for archaeology. It also has many castles well worth visiting. Among the best are:
Located in Collooney, Markree Castle is partially moated by the Unshin River. It was the ancestral seat of the Cooper family with Cornet Edward Cooper obtaining the original 14th-century Markree fort and its lands in 1663. Cooper defeated the O’Brien Clan, killing Conor O’Brien, and married his widow.

Markree Castle became an established manor by the end of the century, and the Coopers were one of the biggest landowners in the country. By the 1980s, Charles Cooper and his wife, Mary, became the 10th generation to live in the castle. They decided to renovate the property and turn the derelict castle into a thriving hotel. 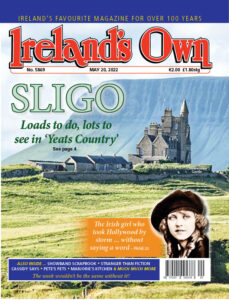 In the centre of County Sligo, you can find the early 14th century Ballymore Castle, once the strongest fortress in the province of Connacht and still an impressive ruin. It is a keepless castle in a large rectangle shape.

Built by Richard de Burgo, the Red Earl of Ulster, it was likely designed to protect his newly won possessions. However, ownership changed hands several times throughout the years, first captured by the O’Connors of Sligo in 1317. It was taken by Mac Diarmada in 1347 and was passed to the McDonaghs in 1381.

And so it went until roughly 1600. Its then-owners surrendered the castle to the English, but it was already in a state of disrepair at that point.