Farewell to the Great John Prine

Liam Nolan pays tribute to the special songwriter, John Prine, who passed away in April

One October night in 1970 a young film critic named Roger Ebert walked into a small folk club in Chicago. The Fifth Peg was an out-of-the-way place on West Armitage. Ebert went there to hear a performer he knew nothing about but who, he was told, was worth listening to. 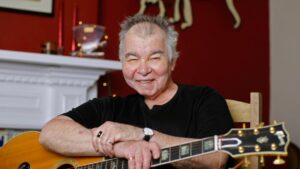 The film critic found he was listening to a master storyteller. The performer facing the small audience was singing story songs.

The first one Ebert heard was about a fellow who found a stars-and-stripes flag decal (a kind of transfer) in a second-hand bookstore. He liked it so much that he decided to collect more similar decals at supermarkets, banks and petrol stations — wherever he went. He plastered them all over his car’s windshield.

The inevitable happened. The decals on the windscreen obstructed his view; he miscalculated, crashed, and was killed. St Peter was unimpressed, as the song’s lyrics made clear: Your flag decal won’t get you into heaven anymore,
It’s already overcrowded from your dirty little war.

The song was essentially critical of what its composer saw as false patriotism surrounding the Vietnam War.
The exceptionally talented singer/songwriter responsible for the words and music died in April of this year. His name was John Prine. He died of complications from the coronavirus.

John died in Nashville, at Vanderbilt University Medical Center, and was on a ventilator when he passed away. He was 73.

His wife (Fiona Whelan, originally from Donegal) said, “He could not overcome the damage this virus inflicted on his body.”