Farewell to the Rhinestone Cowboy

Like many of my age group, the late Glen Campbell evokes memories of our youth. His velvety, sensuous voice – pure and tender – as we danced in smokey ballrooms or sat in smoke-filled cars with the windows open, the car radio full blast and listened in companionable silence to that serene tenor voice telling us all about The Wichitah Lineman… You know, I never knew where Wichitah was – or even if it existed! Nor did I care. 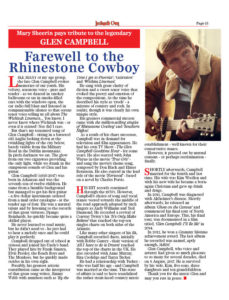 But that’s my treasured song of Glen Campbell – sitting in a battered old Anglia looking down at the twinkling lights of the city below, barely visible from the Military Road in the Dublin mountains.In pitch darkness we sat. The glow from our two cigarettes providing the only light, while we drank in the sumptuous sounds of Glen and his guitar.

Glen Campbell (1936-2017) was born in Arkansas and was the seventh son of twelve children. He came from a humble background but managed to get his first guitar – a five dollar instrument ordered from a mail order catalogue – at the tender age of four. His was a natural talent and by listening to the records of that great virtuoso, Django Reinhardt, he quickly became quite a skilled player.

He never learned to read music, but he didn’t need to – he just had to hear a melody once and he could play it perfectly.

Campbell dropped out of school at sixteen and joined his Uncle’s band. They played hits by Frank Sinatra, Elvis Presley, the Beach Boys and The Monkees, but he quickly made strides in his own right.

Possibly, his greatest artistic contribution came as the interpreter of that great song writer, Jimmy Webb with numbers such as ‘By the Time I get to Phoenix’; ‘Galviston’ and ‘Wichita Lineman’.

He sang with great clarity of diction and a sweet tenor voice that evoked the poetry and emotion of the compositions. At the time he described his style as ‘crock’ – a mixture of country and rock. In reality, though it was clearly his own unique style.
His greatest commercial success came with the million-selling singles of ‘Rhinestone Cowboy’ and ‘Southern Nights’.

As a result of his chart successes, Campbell was in demand for television and film appearances. He had his own TV Show – The Glen Campbell Goodtime Hour – for some years. He also starred with John Wayne in the movie ‘True Grit’ – and sang the movie’s theme song, composed by Don Black and Elmer Bernstein. He also starred in the lead role of the movie ‘Norwood’ – based on a novel by Charles Portis.