Brian O’Nolan was born in Strabane, County Tyrone, in 1911 to Michael and Agnes O’Nolan, the third of twelve children.
His father was an excise officer and a member of the Gaelic League who was working away from home, in Inchicore, by the time of the Easter Rising.
The family moved to Dublin in 1923, when Michael joined the Free State Customs Service. Brian attended Blackrock College and later University College Dublin. 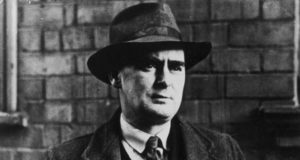 During his time there he acted in quite a contrarian fashion, even making a speech to the Literary & Historical Society in 1935 entitled “What is wrong with the L&H?”
Like his parents before him, Brian was fluent in Irish and submitted a Master of Arts thesis in Irish Nature Poetry, showing his gift for poetry through his mother tongue.
He entered the civil service in 1935, and adopted the pseudonym of Flann O’Brien in order to pursue his literary endeavours, publishing At Swim Two-Birds in 1939.
He then began submitting columns to the Irish Times, under a further alias of Myles na gCopaleen, first written in Irish and then later in English to appeal to the general readership of the paper.

An Béal Bocht, translated as The Poor Mouth, was first published by Myles in 1941 in Irish.
The story concerns a very impoverished area of the Gaeltacht in the West of Ireland, which is suddenly flooded by a migration of middle class Gaelgeoirí from the east coast, seeking the romantic life of the West where they need only speak Irish.
The book is famous for being a tongue-in-cheek satire of cultural nationalism and advocacy of the Irish language by O’Nolan, who had been raised speaking Irish by a Gaelgeoir father. The migrants throughout the book tend to love placing an emphasis on their own Gaelic nature, with a Presidential speech at a local feis in one extract of the book, using the syllable of Gael at least twice in every sentence.
To the locals, such as the protagonist, Bonaparte O’Coonassa, these people are pretentious with Bonaparte even remarking when the speech is concluded, “When this noble Gael sat down on his Gaelic backside, a great tumult and hand-clapping arose throughout the assembly.”
The migrants eventually abandon this area seeing it as too authentic (in other words poverty stricken) in its Gaelicism for even them, and their presence is not sorely missed by the locals.
Flann O’Brien here is taking a jab at what later writer, Frantz Fanon and his postcolonial theories as outlined in The Wretched of the Earth (1963), would articulate.
Fanon argued that in the same way an oppressor or imperialist culture can depict the oppressed or colonised culture as savage, to the point of exaggeration, scientific misconduct and propaganda, that an oppressed culture can in the same way romanticise their own image to ridiculous degrees as some kind of heroic people with a culture unique to the globe. Flann’s portrayal of the Gaelgeoirí migrants echoes what Fanon would say two decades later, in which they see these poor people living in the West of Ireland as living in some kind of utopian fantasy, and in absolute purity due to the authenticity of their lifestyle as opposed to the lifestyle on the eastern seaboard which has been affected more strongly by British occupation of the country and Anglicisation of the culture.

Upon publication, the book was not hugely popular due to its satirising of the Gaelgeoirí from the east coast, since they were, by and large, na gCopaleen’s readership until the book was translated into English in 1973. Praising the book upon said translation, Stan Gebler Davies, a journalist for the Irish Independent, described it as having ‘a sense of black evil’ which co-existed with a wild sense of humour.
The reaction to The Poor Mouth was clearly more positive, at least in critical circles, than the reaction for An Béal Bocht was thirty two years prior. Flann O’Brien is still well regarded as an author today, with his later novel, The Third Policeman, frequently being referenced by the popular US television series, Lost, which ran from 2004 to 2010.
Writer of the series, Craig Wright, regarded said novel and O’Brien himself as a great inspiration for the programme. In hindsight, Flann O’Brien/Brian O’Nolan/Myles na gCopaleen, was a man who contributed great things to the Irish language movement as well as Irish and world literature, and his work The Poor Mouth, was iconoclastic in its warts-and-all presentation of rural Irish life and satire of cultural nationalism of the time.