Florence Nightingale – The Lady with the Lamp

Florence Nightingale is primarily remembered for her incredible work during the Crimean War in the mid-19th century, but actually her greatest legacy is in the social reform and nursing practices which she implemented, writes Mary Rose McCarthy

Florence Nightingale’s parents were wealthy English people. Her father, William Nightingale, inherited the family fortune, made from lead smelting and cotton spinning, at the age of 21. Her mother, Francis also moved in aristocratic circles and would expect her daughters to do the same.

Florence was born on the 12th of May 1820, while her parents were travelling in Italy, and named after the city where her birth took place. Similarly, her older sister was named Parthenope after the Italian city in which she was born.
The family returned to England in 1821. They had a summer house in Derbyshire, named Lea Hurst, situated on 1,300 acres, and in winter lived in Embley House in Hampshire. 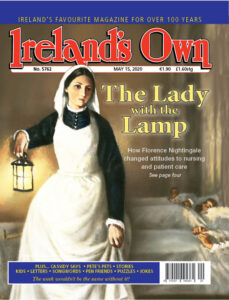 As she grew up in such a wealthy family Florence was educated at home by her father. He taught her history, philosophy, literature, and maths. She was brilliant at languages and could read and write French, German, Italian, Greek, and Latin. She had no interest in the usual ladylike skills of the time, such as home making and needlework. She preferred to read philosophy.

The expectations of someone of her class were that she would make a good marriage to someone of similar means.
However, Florence had other ideas and when she was a teenager believed she had a calling from God to care for the sick and the poor. She was a Unitarian and took great comfort in her religious beliefs. She understood God was calling her to reduce human suffering. For Florence then the obvious route to do that was by nursing.

Later in life, she recalled feeling at the time that she ‘craved for some regular occupation, for something worth doing instead of frittering away time on useless trifles’.

Nursing at this time was considered disreputable and only undertaken by the lower classes. Florence had helped care for sick relatives or tenants on the estate but publicly caring for the sick was anathema to the upper echelons of the time.

Her parents were appalled that their daughter should make such a decision. Young ladies then were expected to do no more than marry at a young age and give their husbands children.

Florence refused these conventions of her time. Eventually her father relented and allowed her to go to Germany to study at a school for Lutheran Deaconesses for two weeks in 1850 and a further three months in 1851. She learned basic nursing skills as well as the importance of good patient observation and good hospital organisation.