Fra Angelico was an Early Italian Renaissance painter described by Vasari in his Lives of the Artists as having ‘a rare and perfect talent’. His life and work have been celebrated for centuries, yet only recently has Fra Angelico’s fundamental importance in the development of European painting been fully appreciated, writes ALAN FROST

Fra Angelico is one of a large number of artists whose work may be seen into the approach to Christmas, adorning the covers of greetings cards that carry a true Christian message. What makes the cards distinctive, apart from other aspects of a unique style, is the appearance in the paintings of figures that should not be there. 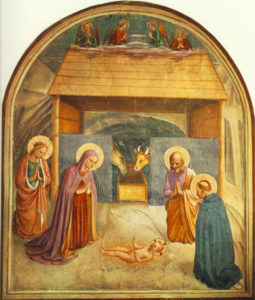 Usually these are saints, mostly Dominicans, such as on a card of the Nativity scene with St. Peter Martyr kneeling beside St. Joseph before the Holy Infant. Another (see picture) presents the seated Blessed Virgin with the Christ child looking out to us, upon her knee, flanked either side by St. Thomas Aquinas and St. Dominic.
The name ‘Fra Angelico’ is how the English-speaking world knows this great painter, a loving sobriquet that his talent and exemplary life would earn. On the continent he would be referred to as ‘Beato Angelico’.

He was actually born Guido di Pietro, in Vicchio di Mugello, Tuscany, possibly in 1395, but more likely in the year 1400. He joined the ‘Black Friars’ in the Convent at Fiesole near Florence in 1420, and took the name Fra Giovanni di Fiesole. He had had some training as a miniaturist and painter before joining the Order of Preachers.

Continue reading in this week’s Ireland’s Own (issue 5581)