On the one hundredth anniversary of his death, John Donohoe recalls the Co. Meath poet who was only thirty when he was killed in France during World War One.

Around 11 million young men met their deaths on the battlefields of France and Belgium in World War I. “A whole generation that was butchered and damned” as the line in the famous song The Green Fields of France describes them. 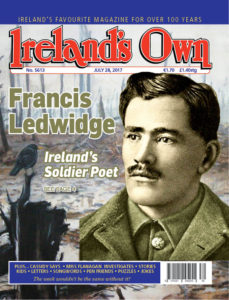 Up to 50,000 of these needless deaths were of Irishmen. Young men who, for various reasons, were fighting for ‘King and Country’. Some of them mere teenagers, thousands in their twenties, lie beneath white headstones in numerous graveyards and war cemeteries in Flanders fields. Men who, had they lived, had so much to offer.
One of these men lies in Artillery Wood Cemetery, about three miles north of the town of Ypres in Belgium. Francis Ledwidge, from Slane in county Meath, a member of the Royal Inniskilling Fusiliers, was killed just a few weeks short of his 30th birthday while road building with fellow soldiers near the village of Boesinghe. It was ironic that he was killed while working on the road, a role he had so often carried out at home in his native Meath as an employee of Meath County Council.

Even though so young, he had already fitted a lot into his short life, and held so much promise. He was a published poet, a trade unionist, local politician, Irish language enthusiast, and even found time for sport.

Apart from his famous Lament for Thomas McDonagh, written following the death of his friend and fellow poet in the Easter 1916 Rising, he has been largely forgotten. However, interest in Ireland’s soldier poet has been revived as the centenary of his death on 31st July 2017 is being commemorated.

The fact that Ledwidge joined the British war effort at all is one of the major contradictions in his life story. A founder of a branch of the Irish Volunteers in Slane, he was secretary of the corp. The Volunteers had been established in Dublin in 1913 as a response to the Ulster Volunteers founded in the north by Edward Carson to resist Home Rule in Ireland.

When war broke out, and with the Home Rule Bill shelved, John Redmond, the leader of the Irish Parliamentary Party, in a famous speech at Woodenbridge, Co Wicklow, called on Volunteers to “go on drilling and make yourselves efficient for the work, and then account yourselves as men, not only in Ireland itself, but wherever the firing line extends, in the defence of right, of freedom and religion in this war.” It was, in effect, a rallying recruitment cry which split the Volunteers.

Continue reading in this week’s Ireland’s Own (issue 5613)