T. Ryle Dwyer charts an overview of the activities of Michael Collins from the stirring oration he gave at Thomas Ashe’s graveside to his role in the General Election of December 1918

Thomas Ashe’s death from injuries suffered while being forced-fed, had a profound impact on Irish public opinion. Michael Collins was particularly upset. “I grieve perhaps as no one else grieves,” he wrote.

Dressed in the uniform of a vice-commandant, Collins delivered the graveside oration, which was stirring in its simplicity.

“Nothing additional remains to be said,” he declared following the sounding of the Last Post and the firing of a volley of shots over the grave. “That volley which we have just heard is the only speech which it is proper to make over the grave of a dead Fenian.”
On October 7th, 1917, Collins went back to speak in Ballinalee, Co. Longford, where Ashe had made the speech that led to his death.

“In the circumstances,” Collins wrote to his sister Hannie, “I came out on the strong side.” Some of what Ashe had said that day was falsely represented by the two policemen at his trial. “I see some more of these potential perjurers about this platform to-day,” Collins added. 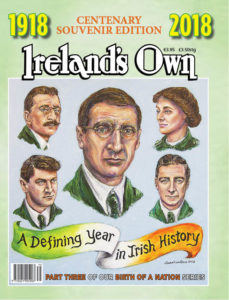 Although the Longford Leader’s report did not mention it, Collins noted that there was “a bit of unpleasantness with a policeman who was taking notes”. When confronted, the policeman thought it best to surrender those notes, and there was no further problem.

“You will not get anything from the British Government,” Collins concluded his address, “unless you approach them with a bullock’s tail in one hand and a landlord’s head in the other.”

Following the death of Ashe, President of the Irish Republican Brotherhood (IRB), Collins, and other members of the IRB supported de Valera when the various separatist organisations came together under the Sinn Féin banner on October 25, 1917. De Valera was obviously appealing to the militancy of young activists like Collins.

“England pretends it is not by the naked sword, but by the good will of the people of the country, that she is here,” de Valera declared. “We will draw the naked sword to make her bare her own naked sword.”

Collins campaigned enthusiastically for de Valera and gave members of the IRB a list of twenty-four people to support for the party executive. Most on his list were defeated, but Collins and his IRB colleague, Ernest Blythe, tied for the last two places.

Next day, at a separate convention of the Irish Volunteers, de Valera was elected president, again with the enthusiastic support of Collins, who was appointed director of organisation of the Volunteers. A twenty-six-man executive was established, but this proved too cumbersome.

Even those close to Collins were “wary of entrusting him with anything like complete control,” Mulcahy noted. They turned instead to Mulcahy, who recognised the tremendous organisational talents of Collins and was prepared to give him full rein, without being upset at what others might have considered meddling.

Collins was appointed adjutant general in addition to Director of Organisation. He travelled around the country re-organising the force, and speaking at various meetings. On April 2nd, 1918, he was arrested in Dublin for a speech in Longford some days earlier. He was bound over until in July and was jailed in Sligo because he refused to post bail.

While Collins was in jail, Lloyd George, the British Prime Minister, announced that his government intended to introduce conscription in Ireland. “If he goes for it, he’s ended,” Collins wrote to his sister Hannie next day. The bill was rushed through parliament, and the Irish Parliamentary Party (IPP) walked out of Westminster in protest.

This was another major turning point for the independence movement. The IPP was irreparably damaged by the conscription crisis.
Its withdrawal from Westminster in protest against the new act was tantamount to endorsing the abstention policy advocated all along by Sinn Féin.

“The conscription proposals are to my liking,” Collins wrote. “I think they will end well for Ireland.”

He posted bail in order to partake in a massive anti-conscription campaign that was largely organised by the Catholic Hierarchy.

The country’s bishops virtually sanctified the anti-conscription campaign by ordering that a special mass be said the following Sunday “in every church in Ireland to avert the scourge of conscription with which Ireland is now threatened.”
Church leaders also called on people to take a formal pledge “to resist conscription by the most effective means at our disposal.”

With the country in uproar, the British dared not implement conscription, but they did try to remove Sinn Féin from the scene on the night of May 17th, by rounding up around 150 of the party’s more active members for supposedly being involved in a German plot against Britain.

Collins was warned of the impending arrests by his intelligence network. He notified de Valera, Griffith and some of the other leaders, but they decided that there was more to gain politically by allowing themselves to be arrested.

With most of the leaders in jail, Collins later gained effective control of both the IRB and Sinn Féin itself. He became “the real master” of the Sinn Féin executive, according to the party’s National Secretary, Darrell Figgis, who described the Big Fellow as “a man of ruthless purpose and furious energy, knowing clearly what he wanted and prepared to trample down everybody to get it.”

No evidence of the supposed ‘German Plot’ was ever produced, so people inevitably concluded the arrests were really in retaliation for Sinn Féin’s role in the anti-conscription campaign. The party therefore gained enormous political capital from of the arrests, and those who were still free continued to act defiantly.

On July 5th, when the British banned all public gatherings, such as football matches and political rallies without a police permit, Collins encouraged the GAA to defy the ban. Football and hurling matches were held throughout the country on August 4th, in open defiance of the ban.

Eleven days later, on Assumption Thursday, Sinn Féin held some 1,800 public rallies throughout the country in a mass display of open defiance.

The Armistice, ending the First World War in November, 1918, was warmly welcomed throughout the British Empire, but there were some very ugly incidents in Dublin.
Collins was attending a meeting at the time, so he was not involved, but he seemed to take vicarious delight in writing about the attacks on celebrating soldiers.

“As a result of various encounters there were 125 cases of wounded soldiers treated at Dublin hospitals that night,” he wrote to a colleague in jail. “Before morning three soldiers and one officer had ceased to need any attention and one other died the following day.”

When the British government called a general election, Sinn Féin put up candidates throughout Ireland. With so many leaders still in jail, Collins played a major part in the campaign. He, Harry Boland, and Diarmuid O’Hegarty, were mainly responsible for the selection of Sinn Féin candidates, and they nominated many who were in prison.
The whole thing was essentially a propaganda exercise, as far as Collins was concerned.

His own election address to Cork voters was brief and to the point: “You are requested by your votes, to assert before the nations of the world that Ireland’s claim is to the status of an independent nation, and that we shall be satisfied with nothing less than our full claim – that in fact, any scheme of government which does not confer upon the people of Ireland the supreme, absolute, and final control of all this country, external as well as internal, is a mockery and will not be accepted.”

Sinn Féin performed magnificently at the polls, winning seventy-three seats, against twenty-six for the Unionist Party and only six for the once powerful Irish Parliamentary Party.

Shortly after the election Collins, Robert Barton, Seán T. O’Kelly and George Gavan Duffy, went to England to explain the Irish situation to the US President Woodrow Wilson, who had arrived in London on a short visit on December 26, 1918.
When Wilson was unwilling to meet them, Collins was so annoyed that he suggested kidnapping the American President to make him listen. “If necessary,” he said, “we can buccaneer him.”

Fortunately, nobody took the suggestion seriously, but the proposal gave insight into why some friends thought Collins sometimes allowed his desire for action to cloud his judgment.

Realising that there was little chance of getting recognition at the Peace Conference, Collins set about preparing for a war of independence. While Dáil Éireann met, Collins was absent, busy arranging de Valera’s escape from Lincoln Gaol.

The ‘Long Fellow’ had been held in England since his arrest on the night of May 17th over the aforementioned ‘German Plot’ during the conscription crisis. Collins was now looking for de Valera to ‘draw the naked sword’ as promised in October 1917.

“All ordinary peaceful means are ended and we shall be taking the only alternative actions in a short while now,” Collins wrote to Austin Stack after the escape. “We mean to make a public declaration before starting.” In short, they would soon be declaring war on the British.