From Rathangan to Tolka Row – The Maura Laverty Story

A new book by author Seamus Kelly focuses on the fascinating life and varied works of Maura Laverty (1905-1966). Laverty was an Irish author, journalist and broadcaster, best known for her cookery books and her work on Irish soap opera Tolka Row. She published several novels, short stories and critical pieces throughout her career.

Maura Laverty was an Irish novelist, storyteller, poet, journalist, scriptwriter, playwright and broadcaster, advice columnist and, last but not least, a cookery book writer. Maura was the most versatile female writer in Ireland between 1940 and 1960.

Though she did not publish a memoir, her four novels are deeply autobiographical. Maura was the subject of an excellent RTÉ Radio documentary by Sarah Binchy (2011). Admirers of her work included Brendan Behan, who wrote to her from his prison cell, and the late Maeve Binchy, who wrote the foreword to two of her novels that were re-published as part of the Virago Modern classics series in the 1980s. 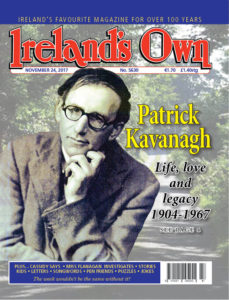 She was born Mary Kelly and was a native of Rathangan County Kildare. One of the motivations for writing the book was that I too am a Kelly from the same village. I first came across Maura’s life and work when I was researching my book called ‘A Ramble in Rathangan.’

One of her novels ‘Never no More’ (1942) caused a stir in her native village as some people were hurt by personal descriptions of what they presumed were their relatives. Time is a great healer and there is now a monument to her memory in Rathangan and a decent locally produced book about her!

Research for the book included tracing her relatives here and in America and reading everything that I could find by and about the writer. This included Ireland’s Own back issues. Two of her novels were serialised in this magazine in 1991 and 1992. We know that Maura was an avid reader and that may have got some of her recipes and stories from it. Over the years several Ireland’s Own articles have referred to Maura and ‘Tolka Row’. Maura was the first scriptwriter (1963-1966) for the ground-breaking RTÉ serial (1964-1968) in the early days of Irish television.