From Samhain to Trick or Treating

‘Trick and Treat’ has its undoubted origin in the ancient Celtic festival of Samhain. On Samhain-Eve it was generally the custom for members of a community to dress in animal skins and perform various rites in an effort to ward off the evil spirits that were widely believed to be abroad on that night. 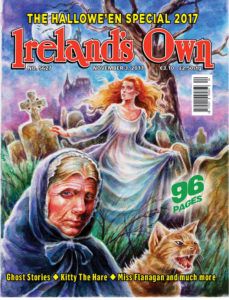 People also left remnants of their meal at the scene to help placate the Evil Ones. Samhain was also an important fixture in the agricultural calendar.

With the crops safely harvested, it was the signal for sheep to be returned to the lowlands and other farm stock to be sheltered in preparation for winter.

Our ancestors also believed that from midnight on 31st October until first light, souls of the Departed returned to their ancestral homes. A candle was placed on a window to light their way and some food also prepared for them.

Malevolent spirits were thought to stalk the earth, while fairy forts were thrown open as the wee-folk changed residences and sought to abduct the unwary and bend them to their will at their new residences. The Banshee was active on Samhain-Eve and walked the lonely roads wailing her portents of death. Little wonder then that folk remained home sitting closely together around the fire as chill November gales rattled doors and windows!