The 4th of October, 1939, was a day that the citizens of Dingle, County Kerry, Ireland would never forget.
The townsfolk all hurried to the beach to witness something that few had ever imagined.

Off Stephens Point, only fifty metres from the beach, was a surfaced German U-Boat. The Irish watched in awe as the hatches opened and sailors emerged.

The sailors then launched a collapsible rubber dingy, loaded it with four men, and commenced ferrying them ashore. This was not an amphibious attack on neutral Éire, but something else entirely.
Just over a month previously, the Second World War had begun. 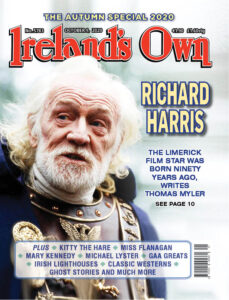 When this occurred, the Head of the Government of Ireland, Éamon de Valera, declared his country to be neutral in the war.

By and large, the neutrality of Ireland was respected by the German military and later there was a Standing Order issued by the U-Boat High Command to strictly observe that neutrality.

That order did not restrict U-Boats from targeting vessels that were conducting commerce with Great Britain. The United Kingdom was an island nation, so the vast majority of what it consumed had to be shipped in. If the Kreigsmarine could interdict that shipping, Britain would starve. Therefore, U-Boats were sent to hunt the waters surrounding England.