There was something very ‘American’ about Glenn Ford, but like many stars of U.S. films and television, he was born in Canada. In fact, he was a native of the ultra French-Canadian province of Quebec, first seeing the light of day on 1 May 1916 – so, happy centenary, Glenn, or centenaire heureux, if you’d prefer. 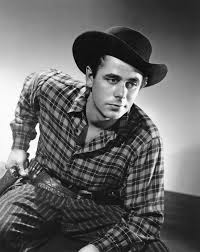 Somehow, it’s hard to imagine this Mr. Middle-of-the-Road American – a role he played so often on screen – speaking French or anything other than American-English.
Perhaps it was because he was only eight years old when his family moved to California that he grew into the Hollywood way of life so easily. The Fords settled in Santa Monica and Glenn was to spend the rest of his life in the Golden State.

Smitten by the acting bug during his teenage years, if not before, he took part in school plays and never considered doing anything else for a living.

On the other hand, Glenn was a pragmatist, a trait he’d learned from his railroad executive father. Ford Snr encouraged his son to chase his dream of an acting career, but to make sure that he could strip down and rebuild a car, do a bit of carpentry, plumbing or electrical engineering. In short, to learn enough practical skills to fall back on.
Glenn loved working with his hands and, although he never had to implement the ‘back-up plan’, he was to remain a DIY enthusiast all his life.

After leaving school, he joined a travelling theatre company that toured the west coast of America. Aged twenty-three in 1939, he did a successful screen test for Columbia Pictures, but for some reason lost to history he made his film debut shortly after in a 20th Century Fox film called Heaven with a Barbed Wire Fence.

Ford’s acting career was interrupted when America entered World War Two and he joined the marines.

Continue reading in this week’s Ireland’s Own (issue 5573)