SEÁN CREEDON meets the popular actress who lit up our Sunday night TV screens playing the role of sassy barmaid, Michelle. She tells Ireland’s Own readers about life before and after Glenroe and all about her debut novel

There is an old saying that if you want to get something done you should ask a busy person. Isobel Mahon certainly fits that category.

Isobel, who played the part of Michelle in Glenroe for 16 years, later trained as psychotherapist and is still acting. She has written radio plays for RTE and BBC, worked as an ‘Agony Aunt’ and recently saw her first novel Learning to Fly published.

Isobel grew up on St. Mobhi Road in Glasnevin, the daughter of Arthur and Thelma. Her father, who worked in Brooks Thomas in Talbot Street, died when she was nine. But thankfully her 95-year-old mother has lived to see her only daughter have her first book published.
Her brother, James, was a friend of Paul Hewson, alias Bono, and Isobel often made the short journey up the hill to Cedarwood Road where Paul lived.

Isobel recalled those nostalgic bus journeys on the 19A for a recent series of A Word in Edgeways broadcast on RTE’s Radio One’s Rising Time programme. 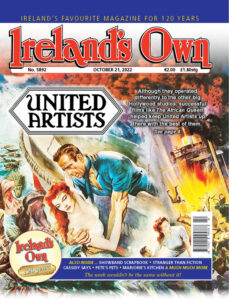 Isobel’s father was a Freemason, who died when she was nine years old. Freemasons took care of the children of deceased members and Isobel attended the Masonic School in Ballsbridge. Later she spent six years in Alexandra Secondary School, in Milltown.

While studying English and Philosophy in Trinity College Isobel joined the Trinity Players.

After graduating from Trinity, Isobel’s mother encouraged her to get a job in the Civil Service and go into the Diplomatic Corps. But by then Isobel was bitten by the acting bug in and was not interested in a safe, pensionable job. She said, ‘‘The late Brendan Kennelly was one of my lecturers in Trinity and he was an amazing guy, as was Terry Browne, who was the head of the department.’

‘‘I was raised as a Protestant, but for the past 35 years I have been practising Buddhism after being introduced to the practice by Mary McEvoy, who played the part of Biddy in Glenroe.’’

After college, Isobel worked as a freelance actor appearing in shows at The Gate and The Abbey. She received the Best Newcomer to The Irish Theatre award for her work on Semi-Private, by Mary Halpin.

She joined the Glenroe cast in the second series and for the next 16 years became a household name playing the barmaid, Michelle Haughey. Isobel featured in the very last transmission of Glenroe in May 2001.