Good Advice Never Goes Out of Date (from issue 5589)

“Ask not what your country can do for you – ask what you can do for your country.” Famous words and most of us would attribute them to the late and much-loved American president, John Fitzgerald Kennedy, who used them in his inauguration speech on January 20th, 1961. However, the question is far from original as it was also posed by Decimus Iunius Iuvenalis, a man better known to scholars of ancient Rome and its history, as Juvenal.

It is only one of several quotations that have stood the test of time as they have been handed down from generation to generation without ever becoming dated or out of fashion. Indeed Juvenal himself can claim the credit for many others including “our prayers should be for a sound mind in a healthy body” and “revenge is always the weak pleasure of a little and narrow mind”.

One could be forgiven for assuming that the advice “make hay while the sun shines” was coined by small farmers in the west of Ireland during bad weather but it comes from the Greek comic writer, Aristophanes, who was actually pointing out to women that the time allotted to them for getting a husband is surprisingly short and should not be wasted.
A clever satirist, he was referring to Socrates whom he greatly admired when he commented that “the old are in a second childhood” and he also produced the theory that “under every stone there lurks a politician”.

It was another Greek philosopher Plato who declared that “it is right to give every man his due” and “all men are by nature equal”.

The sayings “necessity…the mother of invention” and “never discourage anyone…who continually makes progress, no matter how slow” were also first used by Plato who lived from 427 to 347 BC. 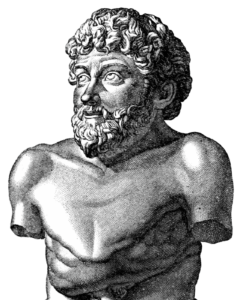 “Give a man a fish and you feed him for a day. Teach him how to fish and you feed him for a lifetime.” Good thinking and it came from Lao Tzu in China nearly 2,500 years ago. The man in question would gain respect by being able to fish instead of having to rely on the charity of others. He also told us to “be content with what you have; rejoice in the way things are”. He is also credited with the old adage “a journey of a thousand miles starts with a single step”.

Incredibly the idea that “familiarity breeds contempt” is even older as it came from Aesop (pictured) whose famous Fables were written during his c.620- c.560 BC lifetime. He can also be said to have given us “appearances often are deceiving”, “one man’s meat is another man’s poison” and the phrase “wolf in sheep’s clothing”. To this day Aesop’s Fables are still worth perusing, regardless of the reader’s age.

Most of us will remember Pythagoras with mixed feelings from our days studying Mathematics and his famous Theorem, a squared + b squared = c squared, is embedded in our brains. He was not just a dull mathematician, however.

He would be very popular with vegans and vegetarians as he is said to have stated that “as long as men massacre animals, they will kill each other” and also that “all have the ability to advance in knowledge”. He was also a philosopher as might be gauged from his assertion that “there is geometry in the humming of strings, there is music in the spacing of the spheres”.

Aeschylus, the “Father of Tragedy” and wonderful writer of plays in ancient Greece told us that “God loves to help him who strives to help himself” and that “in war, truth is the first casualty” while his compatriot Pindar declared that “words live longer down the years than deeds”. Another Athenian dramatist, Euripides, left us “leave no stone unturned” and “events will take their course, it is no good being angry at them”.

We have all heard the claim that “he who f(l)ights and runs away will live to fight another day” and it is based on the opinion of Demosthenes who wisely decided on that course of action on seeing 3,000 of his Athenian brothers being slain by their enemy, the Macedonians. His actual writing stated that “the man who runs away may fight again”.
Among many sayings attributed to the Assyrian Publilius Syrus who is said to have started life as a slave is “a rolling stone gathers no moss”, “practice is the best of all instructors”, “everything is worth what its purchaser will pay for it”, “we are all equal in the presence of death” and “there are some remedies worse than the disease”.

Finally, on a lighter note, a quote from the Roman Judge Petronius who said “you see a louse on someone else, but not a tick on yourself” while he could be referring to most modern governments when he felt that reorganising was a “wonderful method for creating the illusion of progress while producing confusion, inefficiency and demoralisation”.
Pliny the Younger commented on “the indolent but agreeable condition of doing nothing” and declared that “an object in possession seldom retains the same charm that it had in pursuit”. Finally many drinkers would propose a toast to Plato who claimed that “he was a wise man who invented beer”.