Anniversaries are fairly commonplace, but not nineteen-hundred-year ones. One such anniversary is however being widely marked this year – for what came to be called ‘Hadrian’s Wall’.

In 43CE the Romans landed on the south coast of England. By 79CE they had created a network of roads and occupied much of what they called Britannia north to a line between the rivers Clyde and Forth in what is now Scotland, where they had erected a temporary frontier marked by wooden posts.

But rebellions by native tribes of people that had caused the deaths of many Roman soldiers resulted in troops being withdrawn from the north of Britain, and by 100CE a new northern border, represented by a road, forts and signal stations, was established on an east-west line through modern Northumberland between the mouths of the rivers Tyne and Solway. But something more was needed. 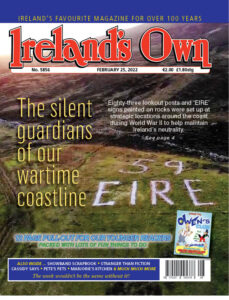 The idea for a substantial barrier was conceived well before 122CE but there is no doubt that the catalyst for the wall that we recognizs today was the visit in 122CE of Publius Aelius Hadrianus, otherwise known as Hadrian, Emperor of the Roman Empire.

With his beard and thick curly hair that distinguished him from the forward-combed locks and clean-shaven faces of his predecessors, he must have been an impressive figure. According to his biography, he came to ‘put many things to right and was the first to build a wall — from sea to sea to separate the barbarians from the Romans’.
Extending to 73 statute miles it was a massive project that was to take at least six years to complete.

The line of the Wall was carefully chosen to make best use of the terrain, particularly any natural rocky crags. The original plan was for it to be built of turf in the west, 6 metres wide, and stone in the east, with observation turrets between defended gates, called milecastles, at one-mile intervals. The stone wall had a walkway along the top.
Before the plan was completed forts were added at intervals of about 7 miles, and a 3.5-metre-wide earthwork, called a Vallum, was constructed south of the Wall, consisting of a central ditch between two mounds.

What the Romans lacked in modern-day engineering equipment and machinery they made up for with manpower. This was drawn from a resource of some 15,000 regular soldiers, all Roman citizens, that were part of three legions based in Britain, supplemented by troops from non-Roman so-called ‘auxiliary units’ – literally ‘helpers’. Amongst their ranks were skilled surveyors, architects, engineers, masons and carpenters, all subject to army discipline.
Although built mainly by Roman legionary soldiers, the Wall was manned by infantry and cavalry from the auxiliary units that were mostly recruited from the north-western provinces of the Roman empire, including Britain.

Roman soldiers were well paid and the military establishments encouraged civilian settlements outside the forts that were occupied by the soldier’s families, merchants and opportunists.

Manning the Wall must have been an unenviable task in the often cold, wet and windy climate of northern Britain. Little is known about the hours soldiers were required to work, but there were no ‘weekends’ or 48 hour passes in the Roman army.

Whilst the Wall was being built some soldiers wore armour and carried weapons to protect the workers, but the labourers wore a tunic or loin-cloth, with the probable addition of woolly cloaks, trousers and sheepskin boots during colder weather. The Auxiliary soldiers who manned the Wall when it had been built wore a simple belted tunic, scarf, socks and shoes.