The Office of the Chief Herald is part of the Genealogy and Heraldry division of the National Library of Ireland. The Chief Herald is responsible for the granting and confirming of arms to individuals and corporate bodies. All arms granted are recorded in the Register of Arms, maintained since the foundation of the Office in 1552. Colette O’Flaherty, Ireland’s Chief Herald and keeper of Special Collections in the National Library, talks with Mary Sheerin.

Colette O’Flaherty can barely contain her excitement when we meet up on a Zoom conference for our interview. The day before she had purchased some previously unknown letters of W. B. Yeats that he wrote in his late teens.
“It was truly a great acquisition,” she sighs with contentment. “There were 7 letters in all written between 1883 and 1885. Six were written to Ethel Veasey and one to her brother, Harley. They clearly show the teenage Yeats’ insecurities about his lyrical writings.

He also writes about the family’s move from Howth to Harold’s Cross and how he misses “…the view of the sea from his window.” Harold’s Cross is not scenic as this snippet clearly shows: “… but here from my window I see a straight wall and by much stretching around the corner, the glimpse of a bush very dim and dusty – a lamentable view for a maker of verses.” 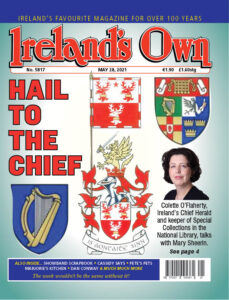 “These letters are a wonderful addition to our already extensive Yeats collections, she says.”
O’Flaherty explains how she got them. “It was via a Sotheby’s London online auction. They sold for 53,076 Euro. Thus they now belong to the Library and to the Irish people,” she says proudly.
Dressed in black, O’Flaherty looks both elegant and rather arty with a mop of dark, curly hair. Her blue eyes gleam with a fierce intelligence.

The youngest of five children, Colette was born and lived in Athy until she was 11. She then lived in Cahirciveen for a short, but what she terms ‘glorious time’. The last family move was to Greystones. “My father worked in the old Department of Posts & Telegraphs so the moves went with his work.

“I went to secondary school in St David’s in Greystones and I joined the Civil Service as an Executive Officer after leaving school. I worked in the Revenue Commissioners but with the support of my much put-upon parents, left pensionable employment, to study history in UCD.”

“Graduating in 1985 wasn’t exactly great timing for a History BA job-seeker, but I was fortunate to be re-appointed to the Civil Service in 1986, again as Executive Officer. I worked in a few departments, including the Taoiseach’s and Labour – where I met my husband, Leo Costello.”