Hairstyles From The Ages

During the 1920s or ‘Flapper Era,’ as it is also called, fashions for women were quite boyish. Feminine curves were hidden beneath straight cut dresses, hemlines became shorter and so did hair lengths. Cropped bobs were very popular and were first seen in Hollywood on actresses like Irene Castle. Then along came ‘The Finger Wave’ hairstyle. Finger waves were used to soften the ‘hard edge’ of the bob.

Finger waves were often seen alongside pin curls, which were used to style and finish the ends of the hair. In old-fashioned hairdressing, the rule was to have three waves and two rows of pin curls.

Film stars such as Scarlett Johansson are synonymous with ‘The Peek-a-Boo,’ considered to be one of the most seductive styles.
It transforms the wearer to the status of silver screen goddess.
This style is made up of sleek, shiny shoulder length hair with one side dipping over the eye.
By contrast, during the war years, screen greats like Rita Hayworth popularised ‘Victory Rolls’, a style that brought the hair back from the face.

While women rolled up their sleeves and got involved with the war effort, they also rolled their hair. Fashion was rapidly changing due to shortage of fabric and the need to ration.
Hairstyles had to be practical as women worked in the factories while their husbands went to war.  ‘The Victory Roll’ was named after the manoeuvres of fighter planes and it was a safe way to dress the hair, keeping it away from machinery and leaving room to put on a hat without squashing the style. 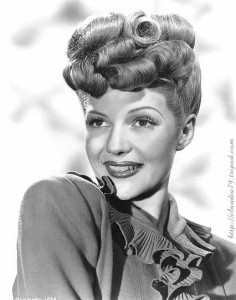 In 1942 Betty Grable popularised ‘The Poodle,’ a style comedienne Lucille Ball made her own. In the fifties, curls and soft hairstyles were definitely to be aspired to. Curly hair was sophisticated. This meant perming the hair; a process that for straight haired ladies had to be repeated every six weeks or so. Perms have become a lot safer nowadays and the results more reliable but ‘The Poodle’ can still be recognised by the piling up of curls on top of the head.

If the ‘Victory Roll’ and ‘The Poodle’ left the face completely on show, not so when ‘The Fringe Roll,’ came along.

It’s ideal also for those who don’t want to commit to a permanent fringe as it involves creating a false fringe by rolling and securing the hair with grips. Bettie Page was the notorious pin-up girl who wore ‘The Fringe Roll,’ in the fifties.

Women in the forties and fifties would spend hours styling their hair, making a weekly trip to the hairdressers for a shampoo and set part of their routine. During the war however, money was tight so those weekly trips may have become fortnightly or less frequent. Women learned to use rollers at home and it wasn’t unusual for women to spend all day working around the house with rollers in. Hilda Ogden in Coronation Street comes to mind as indeed does Linda Carter in EastEnders. Though Hilda’s character no longer exists, the memory of her large rollers peeking out from under her headscarf is nowadays evoked by the sight of Linda Carter’s giant pink hair curlers as she bustles around The Old Vic. 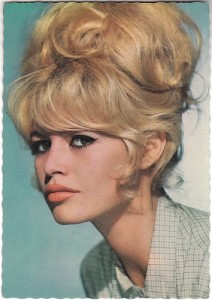 Quiffs belonged to the era of Elvis but the floppy hair look is very popular today. It originally belonged to rockabilly fans, exactly like our own Imelda May’s gorgeous two-toned pompadour. Women can wear a pony tail with their quiff which makes for a great swing and flip while dancing!. The only prerequisite for a quiff is to have a long fringe. In the 60s, Brigitte Bardot wore a beehive, often copied today by celebrities such as Cheryl Cole. The beehive was the most sought after and replicated style of the 1960s. It is associated with The Beatles and the mini-skirt. Given its name because of its resemblance to the shape of old fashioned beehives, it is still popular for weddings and social events, on the catwalk and even as an everyday style. For a successful beehive, backcombing is essential. 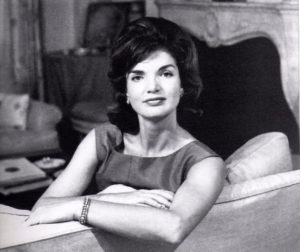 Hair that is oversized and loosely coiffed is known as ‘bouffant,’ a style that Jackie Kennedy made famous. This style also requires a lot of backcombing and it was originally designed to balance out the full skirted shape of fifties dresses. ‘Big Hair,’ in the way that Jane Fonda wore it in the film ‘Barbarella’ is still desired by women all over the world. ‘The Barbarella’ look was popular with go-go dancers, first seen twisting on the dance floors of the early sixties.

Whatever the hair length, colour or chosen style, one thing’s for sure. The best solution for a ‘bad hair day’ (a style experienced by most women everywhere) is to buy a fashionable headscarf and learn how to use it in creative ways!