Dublin can be heaven with coffee at eleven and a stroll in Stephen’s Green, according to the words of The Dublin Saunter, the song specially composed by Leo Maguire for the distinguished Irish actor of stage and screen, Noel Purcell.

Well, now Gregory and Audrey Bracken, a brother and sister from Co. Kildare, have produced a whole book of heavenly strolls in Dublin which confirms that Ireland’s capital city is indeed a wonderland of gracious streets and squares, of world-famous theatres and magnificent museums. 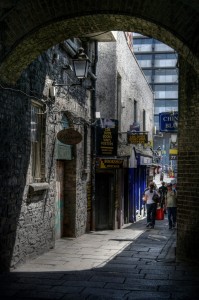 There are ten walks in all, starting in the medieval city near St. Patrick’s Cathedral and working their way to end at the Guinness Brewery at St. James’s Gate. Each walk starts where the previous one ends, and each one is accompanied by clear maps, expert architectural insights, fascinating historical detail and beautiful hand-drawn illustrations.
In addition, there is a Further Afield section which takes in buildings and places a little bit outside the city centre, including Howth and Dun Laoghaire.

This is the oldest part of the city, dating back to prehistoric times and there are many stories related to its fine old buildings. It takes in the Liberties, considered the heart of Dublin’s vibrant working class history.

Temple Bar is described in the guide as home to a charming mix of early Georgian homes, nineteenth-century warehouses and early twentieth-century industrial buildings.
The Smock Alley Theatre, which dates from 1811-13, is notable as the first Theatre Royal outside London. Plays premiered there include Richard Brinsley Sheridan’s School for Scandal and Oliver Goldsmith’s She Stoops to Conquer. David Garrick first played his Hamlet there.

The Ha’penny Bridge is a pedestrian bridge across the Liffey and was originally a toll bridge, hence its name. It was built in 1816 and named in honour of the Duke of Wellington, but the ha’penny name stuck, even after the toll was scrapped in 1919.